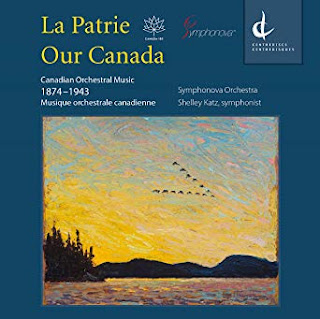 This is an album that if it were never made, one might have to imagine it. Why? Because, for those that need to know, and sometimes that includes me, Canada is a real place with real people, a real country where everyone lives and dies like we all do and in between they make real art and real music, and we should not forget that and try to listen to it--the music I mean. Joni Mitchell and Neil Young, Oscar Peterson, OK, this should give you an indication that Canada is NOT some backwater. So what about Classical music?

There are all kinds of things to hear and I try to cover as much as I can. One that came out recently promises much even just in its title, La Patrie, Our Canada, Canadian Orchestral Music 1874-1943 (Centredisks 25618). Well as soon as I heard about it I made sure I got a copy. And I played it a bunch of times and loved the music, but there was something about the sound that puzzled me. In the acoustics of my current living space it was not clear. But then I listen with earphones today and I recognize what was strange. The instrumental performers are all very good, but then sometimes the masses of orchestral strings are sampled and that was what seemed so strange sounding. Shelley Katz is the person behind all of this. He calls himself the "symphonist," Truth to tell he creates an orchestral backdrop with only 12 musicians but it gives you an excellent of idea what a full blown orchestral reading would sound like. So that I must say right off the bat. He performs a miracle in a way.

No problem so long as you realize this. No problem because this is music that needs to be heard. We get eight works by eight composers spanning the time indicated in the title. Some of the names I know and have heard the music by, but all too few and as I listen I know it has been my loss, because this is very worthwhile music in styles one might expect of each period, but not written by slouches or hacks, certainly. Far from that.

And I must say it is good to hear this music. Is all of it breakthrough masterpieces that should have stopped the movement of time? Probably not. Still we need to hear this music and more of it I think. So bravo for it. After reading this if you feel you are interested, well do not hesitate. It gives you some of the Canadian music you might have missed. And good for that. Not missing it I mean.

Posted by Grego Applegate Edwards at 8:39 AM