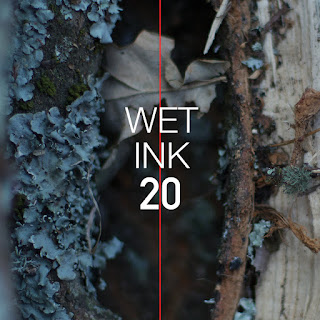 There is a facet of today's New Modern Music that sometimes gets scant attention. That is the fertile relationship that flourishes at times between very modern improvisation or so-called "Jazz" and New Music. Ever since the onset of Jazz in the US Modern Classical composers have had responses to it. One might only think of Gershwin, Debussy, Ravel, Stravinsky, Milhaud for starters, then Zimmerman, Penderecki, and others in the later High Modernist camp. At the same time with the advent of "New Thing" out of the music of Cecil Taylor, Ornette Coleman, Albert Ayler, John Coltrane and others there was a kind of open freely improvisational stance that eventually led to some very productive confluences of Jazz Improv and New Music from the other side of the spectrum.

Both aspects of the confluence can be heard in the recent recording of very New Music by the Wet Ink Large Ensemble. The album is simply entitled Wet Ink 20  (Carrier 041). It gives us six compositions in a very adventuresome zone that often enough shows influences of Avant Jazz as well as New Music. So we get a long and exciting opening work "Auditory Scene Analysis" by Eric Woebbels. It has the very avid sort of pointillist counterpoint one can hear in large ensemble jazz music as well as the sort of post-Webernian, post-Ivesian ideas of simultaneity and difference that have been developing on the opposite side of the aesthetic coin.

In order to play this music with the kind of heightened spirit that such a style needs, an ensemble should have some grounding in both camps. The Wet Ink group grew productively out of a core septet of composer-improviser-performers. In fact of these core members Alex Mincek, Eric Woebbels, Kate Soper and Sam Pluta each contribute a composition to this program, so four of six are home-grown works.  All of the septet looms large in the readings of the music. They take the lead in giving the music a spontaneous dynamic that furnishes everything with a convincing ring. Of the other composers Anthony Braxton is by now of course well known as a pioneer in forwarding the avant-new nexus, ever since by around 1969 when he first began receiving international attention and acclaim. As for the other non-ensemble composer Katherine Young I will admit I have not been familiar until now, but she gives us something excellent in her "Like A Halo."

A run-down of each work would not be practical for this article, and in the end all participate in the improv-composed nexus so fully and so well that the entire program can be and ultimately is (in my case) experienced as a kind of gestalt whole. The entire sequence is an outstanding example of how two stylistic worlds can and do merge with complete synergy and performatively stellar results.

If you give this one your complete attention and allow it to reverberate in your listening mind with repeated listens you will find it a landmark example of where Modernity has gone, one of the very productive places that neither looks back very far nor does it compromise in its zeal for an energetic expressionism. Not everything need sound like this, and good for all that, but this is a very valid way to make the "music of the future" as New Music has ever envisioned. It is a treat for the ears. By all means get it if you can. And listen! The Wet Ink Ensemble is doing important work.
Posted by Grego Applegate Edwards at 8:12 AM