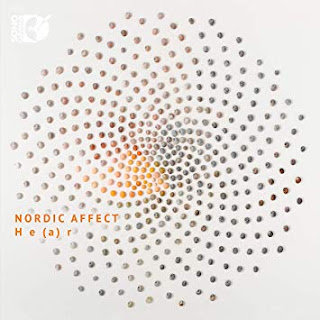 Nordic Affect is an Icelandic Modern Chamber quartet. They have a new one. I covered an earlier one happily on March 6, 2017. One year and a half later I am still here. Still writing these reviews. And I am again happy to write on this group of very adept and forward leaning women, about their new album He(a)r (Sono Luminus 92224 CD & 5:1 Blue Ray Disk).

Graphic design should have no other function than to introduce prospective listeners/customers to climb into the music, and initially to buy it. That said, knock-out type from a grey background would have gotten designers fired from every job I'd ever had in the pre-internet pre-DIY publishing and music days. If artists and persons involved ask me about a certain artist and release and I have no idea because I cannot even read the cover, there is something not right. And forgive me but I have real trouble reading the information on this release because the design is not geared for the reader but instead for some image thing. If you do not know what it is or what is on it, what are you getting from such graphics? I am grouchy today so I am saying it for this release but really it is true of maybe 70% of the music I receive.

That being said let me try and decipher what it is I have been listening to happily. Halla Steinunn Stefansdottir is on violin and voice, Guorun Hrund Hardardottir is on viola and voice, Hanna Loftsdottir plays cello and uses her voice and Gudron Oskarsdottir plays harpsichord and too uses her voice. Now if I have spelled anyone's name wrong (and I am sorry about the accents, my system is not clearly adapted to such things) blame this design!

Well there are seven compositions to be enjoyed on this program. There is ambiance, there are spoken word poeticisms and narratives, there is New Music interplay of a high order, post-counterpoint you might say. And the music is a very fine thing to me. Halla gives us the title composition and it goes by in a flash even though it is ten minutes long--that because it is a wondrous sculpting, a vibratoless post-modern chorale that fascinates and encourages to listen. He(a)r is a play on the English "hear" and the Icelandic "her" (with an accent), which means in the language "hear." Of course then I guess there is the play on "her" as a denotation of a woman. It is far from irrelevant since the feminine excellence of this music is an important trait, that it is a woman's musical force we hear and I say amen.

I am not going to try and figure out the names and titles of the works here. They appear all to be Icelandic women and I congratulate them because the music is exceedingly beautiful and engaging. Not everything is new-lyric and that is good, just like a meal is best if it is not about one taste in unrelenting sameness. The space for the extended technique sort of Modernity is used creatively and wisely and it frames and brackets the tonal washes properly and bracingly.

I could say a great deal more because this is not a music that easily fits into the usual labels. Yes everything about the Modern New Music scene has some relation to this set of musics. We hear on he(a)r a uniquely original stance that the compositions and performances embody. That is encouraging and also very rewarding to hear. So listen, do that and you will h(e)(a)r-(h)ea(r) and perhaps exclaim "here-here!" I did that to myself in response. Bravo!
Posted by Grego Applegate Edwards at 9:30 AM