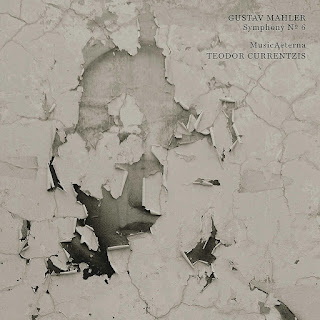 As I have been listening to this new version of Gustav Mahler's Symphony No. 6 in A minor "Tragic" (Sony Classical 19075822952), which is exceptionally well done by Teodor Currentzis conducting MusicAeterna, it suddenly becomes clear to me. I hear Mahler spending his summer like always with Alma in a mountain chalet, his music waxing folksy as they soak in the feeling of the Austrian countryside, while Alma perhaps pops in to check on how he is doing. They live, I can feel that whole summer for them. And it contrasts with the seasonal struggles in Vienna with its factions and intrigue. You can hear the contrast. What a pictorialist he was. Incredibly powerful musical imagery he created. Glad for all this.

And in large part we can thank Teodor Currentzis and what he gets so wonderfully out of MusicAeterna for the extraordinarily clear sonic staging that allows us the climb right inside the music as if for the first time. Each nuanced sectional bit on the way to the whole is handled with precisely etched detail, real care. Now are we to read this entire symphony as a lesson in Tragedy, an anticipation of the horrible catastrophes of the Modernity of the 20th Century? Sure if you like. But you do not have to look any farther than Mahler's own life in Vienna and the brutal politics of Vienna's music world. The point is not as much the pointing towards in this incredibly detailed reading of the 6th as it is the overall series of pictorial moods and the brilliance of their detailed sonic wonderment.

The '50s-'70s in the music worlds I have grown up in (that is in the USA) were most definitely a time when the literal-pictorial were very much at the forefront. "Mood Music" albums in a way came out of Strauss' literal programmatic view of music, the popularity of which perhaps peaked when "Thus Sprake Zarathustra" figured prominently in the film 2001: A Space Odyssey. Grofe's Grand Canyon Suite had a motif for every literal thing, even the lightening in the thundersqual and my dad loved to play it when I was around three. I listened very closely. So did '50s USA in general.

The mood music craze took off then, with a ton of music that reflected a wide swatch of moods, perhaps peaking with the Mystic Moods Orchestra who furnished psychedelic muzak to a first generation of would-be zoners. And really the artistic peak of this pictoral way you can hear in Mahler's brilliant tone painting, not to mention Debussy and Ravel. Oh and Ives.

And as you listen closely to Currentzis's reading of the 6th you experience the orchestrational richness of this music with a level of detail we rarely have experienced, if ever. It is as if you are given entrance to Mahler's aural imagination as he reflected on how the orchestra was to sound. You are inside his musical mind.

I surely have not heard a more stirring and beautiful version of this symphony. It is as if we hear the work for the very first time. And that is saying a great deal. People who expected to find sonata form in all the music at that point missed out on what Mahler was after. He was a truly brilliant sound colorist. It was still all about the notes, sure. But it was all about how he shaded every possible sound to create an aural set of canvasses unparalleled in what came before, even from a Wagner. Things that followed from this period kept working toward a saturation of colors in sound. Listen to Webern and you hear a sort of anti-Mahler's Mahler, still extraordinarily attuned to the sound color possibilities. So also Messiaen, Boulez, Stockhausen, and a litany of such Modernisms.


And the recording at hand reminds us how much we can truly hear with a conductor like Currentzis and, for that matter, a brilliant sound engineering job on the part of the Sony folks. This is a genuine phenomenon, a Mahler performance that should not be missed by anyone who cares about such things. The middle movements are tender to the point of tears and the outer movements have menace and a musical equivalent of volition that is stirring beyond the norm to say the least! Bravo! This is a 6th that changes the way you hear the 6th!


Edit
Posted by Grego Applegate Edwards at 7:57 AM