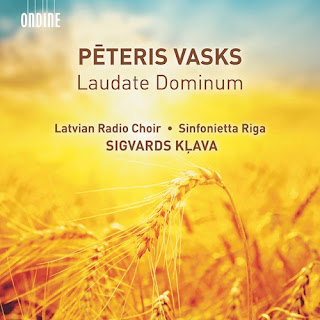 Peteris Vasks (b. 1946) is Latvian, like Part is Estonian. That is, each takes some essence from his musical culture and does something original with it. The music contained on Laudate Dominum (Ondine ODE 1 302-2) shows this most clearly. It contains five recent (2011-2016) Vask works, four for choir and orchestra, and one for choir and organ. Sigvards Klava directs the Latvian Radio Choir, Sinfonetta Riga and Ilze Reine on organ in this program of tonal, expressive and sometimes seemingly somewhat somber music. As the liner notes put it, he "confirms the existence of the vertical spiritual axis that defies storming, breathless materialism. Born from suffering...[it] always grows to prevail, to celebrate and bring the light of hope."

In that way there is something of the influence of choral music past. Without imitating the sound of a Latvian choral origin it nevertheless points to it in its minor modal diatonic meditative tonal cast. The gentle suspensions and long-lined hushed meditative mold of the music at times is irresistible, in some ways showing a Modernism we hear in Faure choral music and beyond, yet not precisely so much as preciently, that he makes the roots point to him. In the end, in the last work "The Fruit of Silence" (2013) we feel a resolution into a simple lingering major chord peacefulness that has been denied us quite until this end, and it works for our need for a closure and we happily get that. But not before some of the storming and the urgency of the previous works, "Da pacem, Domine" (2016), "Mein Herr in mein Gott" (2016), "Laudate Dominum" (2016) and "Prayer (Lord Open Our Eyes)" (2011).

We hear the reaching upwards of Palestrina, of Des Prez, of Bach and Handel, without the contrapuntal ornateness, but rather a pared-down essentialism that floats like clouds slowly passing above us in a light wind.

Yet the music has a clearness, a clarity not at all cloud-like but nonetheless hovering above. It is singular, it is beautiful, it is not quite like any other and so is before us, above us, behind us in its honest sincerity. It there is a feel of time and past upon us in the present, it is in that a continuity in a Modern world, a place such as where we live today.

And so I must recommend this to you who seek out the new in New Music. It is ravishing. Peteris Vasks is special and we hear why on this album, very much so.

Posted by Grego Applegate Edwards at 10:18 AM