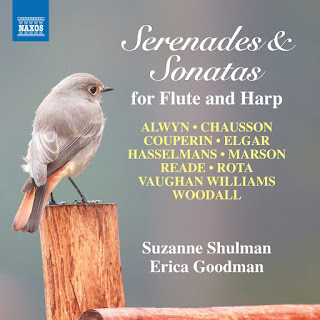 If this music and its performances here are virtually "no brainers" there is precedent. In my experience anyway. Very many years ago when I was a student in Chicago I was a member of the Musical Heritage Society, who released mostly mail order albums of recordings that they licensed for US distribution. Their selection of the month for January was a two-lp set of music for string orchestra which arrived in my mailbox the first mail day of the new year. I was feeling vulnerable as one does in those first days of, what was it, 1983? The set started out nicely with Vaughan Williams' "Fantasia on Greensleeves," which was a definite way to begin the year. After all a version of "Greensleeves" with different lyrics was the Christmas song "What Child is This?" and so it seemed seasonal.

Now we have another very different album, which is out right now, this time music for a different instrumentation. Serenades & Sonatas for Flute and Harp (Naxos 8.573947) it is called. And it starts out with a flute and harp arrangement of Vaughan Williams' "Fantasia on Greensleeves."  So it is good to hear this just now, though it would be good anytime.

It goes without saying that such an instrumentation lends itself to the idea of the "Ambient" though the music was written long before that catch phrase became topical. Suzanne Shulman on flute and Erica Goodman on harp ensure that the music comes through with bell-like clarity and ravishing sonarity. If you love this instrumentation in your head the program will not disappoint.

It is a wide ranging and pretty adventurous gathering  of singular music. The early 20th century English proto-Modernists/pre-Modernists are well represented by Vaughan Williams, William Alwyn (Notably his "Naiades - Fantasy Sonata for Flute and Harp"), and Edward Elgar, among some others not as well known. Then we get some welcome additions in a couple of Francois Couperin miniatures, a little Chausson, Nino Rota and so forth.

This is not a sound by which to set the world on fire. But then for the purposes of this music we do not always want to set the place blazing so much as we might feel a bit damaged by life and seek to recover from the "holidays." That would include a New Years Day hangover of course, though that is not my thing anymore. It is substantial music that manages to bring you some psychic relief without resorting to New Age pablum, so listen without guilt!

I would highly recommend this to anyone who wants something soothing or just loves the idea of the harp and the flute together. It is a very nice way to while away some time, to prepare for or live through winter dreams or the promise of springtime, or any number of other ways to get into a poetic haze. Very nice, this! And it is substantial musically.