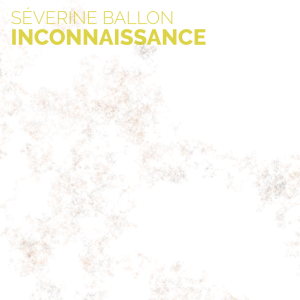 This is not the very first album of extended techniques solo cello I have reviewed. But it is among the very, very best. I speak of Severine Ballon's Inconnaissance (2016-18). These are some eight compositions that have come out of her extensive improvisational immersion in the cello as a virtually infinite sound producing agent, so to say. Spending 2015 as a Visiting Fellow at Harvard helped allow her to convert her improvisational experience into compositional forays. These results come out of the three productive years that have followed on the heels of her residency.

The liners to the CD explain that Ballon was after a sort of general simplicity of concept for each piece, a way of playing that then gets extended outwards so that the listener grasps each episode as a structural endeavor but then of course with aural exceptionality. Bowing, understandably, is key to the sound production entailed. Equally of course what the right hand does is also key. So for example harmonics are produced with a certain action, etc. All this is properly considered for each work with inspiration but also with a consistency internally for each..

And in the end that simplicity brings us to each segmental composition as a special thing, a unified time and place of performance, as Aristotle might have remarked were he around now and into New Music. This is music of a certain consistency, rather than of a "make a sound, make a different sound" sensibility. Nothing wrong with either way of course but Ms. Ballon distinguishes herself as more of the "same" than the "difference" approach. Yet this is not Minimalism, not at all.

And too the realm of expression is the all-in-all, and so too there is a kind of straddling of the performativity of Free Improv with the significant-form goals of New Music High Modernism.

It works and works well. You will find this out I think if you listen closely a few times. Ms. Ballon is very worthy of your attention. I am impressed with and happy to experience Inconnaissance. You who adventure into new sounds I suspect would be too. Very recommended. For those that dare.
Posted by Grego Applegate Edwards at 7:36 AM