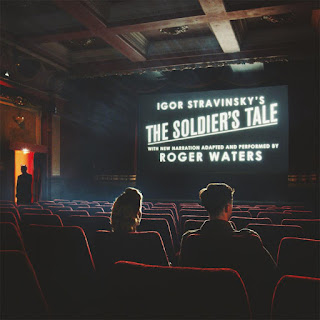 What The Rite of Spring was for the orchestra in the  coming of Modernism, so A Soldier's Tale was to the chamber music realm. Yet by the very nature of the work as it was meant to be performed by Stravinsky, "to be read, played and danced," the general reception of the work has been somewhat more muted than it might have been had it been a more simple matter of a chamber work in the conventional sense. Its original version, L'Histoire du Soldat was meant for a chamber ensemble, a dancer or a contingent of dancers and a dramatic reading-enacting of the poem in French, as written by C.F. Ramuz. The story (as Wikipedia tells us) is in turn based upon the Russian folk story The Run Away Soldier and the Devil. The original version was premiered by Ernest Ansermet in September, 1918, some 100 years ago now. All good. And thanks to Wikipedia for filling us in on the basic facts of its genesis and birth.

So in some ways the lengthy dramatic reading and the full hour or so it takes to perform the work properly has in this way helped slow down the work in its complete dissemination among general audiences in the music world (as opposed to The Rite of Spring). The original French version leaves a non-French speaking listener rather in the dark for long stretches where the narrative holds complete sway. That was remedied by German and English translations for performance, the latter by Michael Flanders and Kitty Black. But even so any language version of course is in a form not readily accessible to other language speakers. Its length too was too long for a typical LP in the first high fidelity era. With the CD it is easily accommodated.

So with all that we now have in celebration of its 100th anniversary the English version as adapted and narrated by Pink Floyd icon Roger Waters with the chamber orchestra part performed by BCMF (Bridgehampton Chamber Music Festival) Musicians (Sony Classics CD I cannot make out the release number, sorry).

The work undoubtedly wins the day with this quite excellent BCMF performance and Roger Waters' quite dynamic and nicely dramatic narration.  We follow the story of the soldier who sells his violin (and his soul) to the devil in return for an enchanted book that allows him to gain infinite wealth. It as is meant to be makes perfect sense of the bizarre march motif that clashes against the multiple-meter incarnations and the percussion player's refusal to hew to the military regularity of the music. So too the fiddle motif in the violin is the soldier's folk enthusiasm translated perfectly to Stravinsky's Modern brilliance. And Roger's narrative with its full "local" colors contrasts tellingly between working class soldier English and the more upscale ESL of the devil.

Waters adaptation and BCMF's exemplary instrumental reading gives us a worthy Centennial look at one of the undeniable masterpieces of the past century. In the "Triumphal March of the Devil" the final multi-tempo deconstruction of the march theme triumphs truly, for we hear it as it is meant to sound and we also understand the meaning of the music after savoring the full story as Waters tells it to us. The Devil is the infernal side-stepping of the march into mathematical complexity that belies the march itself. Whereas the soldier and his march is the inexorable forward motion of metrical evenness, the devil is the confounding of that into a hellish multiplicity. In effect the devil turns war and the military into living hell, as no doubt people realized all-too-readily in 1918, the tail end of the infernal First World War. The full brilliance is before us in this version, and we grasp it all as we might have 100 years ago, certainly as Stravinsky meant us to hear and understand it.

So I give this a very strong recommendation. It is an ideal way to experience the work and understand it. Waters triumphs! Encore.
Posted by Grego Applegate Edwards at 7:33 AM