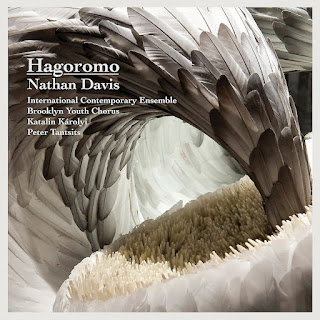 I tend to be reassured when certain configurations endure. Piano trios, string quartets, works for orchestra and choral units with soloists, operas, cantatas, etc., in other words the various em-parcelments, the various genres. They are like the fruit cake we received this time of the year from my aunt, em-parceled and delivered I think by United Parcel, with brown paper and tied with string as packages were then. It was reassuring, somehow. Not that I shy away from unusual alternate configurations like Henry Brandt's flute orchestra, but a little continuity can be a fine thing.

This morning I turn to such a grouping, an operatic work for the crack chamber outfit known as the International Contemporary Ensemble, plus the Brooklyn Youth Chorus, contralto Katalin Karolyi and tenor Peter Tantsits, under the direction of Nicholus DeMaison. All this for Nathan Davis' intriguing Neo-Quasi-Asian and Modernist resonance Hagoromo (Tundra-New Focus Recordings TUN009). The fact that it is an opera is reassuring, but then too it is innovative in what it does and how it transforms an unexpected source quite readily and absorbingly.

The work was recorded live at the Brooklyn Academy of Music's Next Wave Festival.  It was commission by ICE and is designated a "dance opera." The performance situation calls for choreography for two dancers and puppetry. The libretto was written by Brendan Pelsue.

Hagoromo takes its name and story line from the 500-year-old Japanese Noh drama by the same name. It concerns a swan maiden and a fisherman. The latter finds the former's feathered cloak and wishes to keep it. Negotiations with the swan maiden ensue and in the end  there is the return of the raiment to the swan maiden and the subsequent rise of a mutual affection between them.

A lively vaguely Asian percussion singularity and an alto flute in harmonics mode begins the work mysteriously and the very pronounced resonance of the work is established. The work falls naturally into the performative of soloists and chorus and the instrumental parts too seem natural. Yet all of it has an almost ritual primality at times, as definite echoes of the Noh music from the original.  At the same time in varying degrees there is a High Modernity of harmonic-melodic intent. All this works quite well for a result very intriguing and worthwhile.

It all falls most nicely onto the ears. The youth chorus gives the sound quality a heightened mythical aura as does the orchestration as well. It is most lovely music! Nathan Davis is a natural! Brilliant!
Posted by Grego Applegate Edwards at 9:50 AM