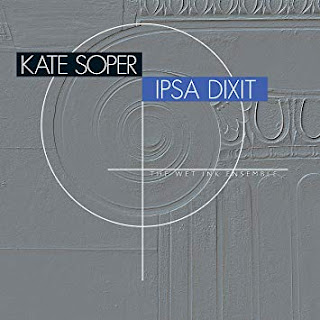 Part of the celebrated Wet Ink Ensemble, vocalist-composer Kate Soper steps out front with three members of said ensemble for a fascinating two-CD recording of compositions in the special speech-song mode she does so well. Ipsa Dixit (New World 80805-2) features the vocal arts of Kate Soper as set against a mostly minimal (not necessarily Minimalist) sonic balance of Erin Lesser on flute, Ian Antonio on percussion, and/or Josh Modney on violin.

The texts are central to this music. We have the Aristotle and Sophocles views of artful things in "Poetics," then the self-reflexivity of language entailed in Lydia Davis's text on "Only the Words Themselves Mean What They Say," Aristotle on "Rhetoric" and "Metaphysics," the death of Socrates in Plato's "The Crito" and a miscellania of philosophs, people-thinks and word-artists on "Cipher."

A poetic economy of means in the service of High Modernist interplay as we think of it in the present-day world, such is what we experience as the all-in-all of the program as we live through it here. Stunning is the way speech, singing and instrumental resources parallel one another throughout. Ms. Soper is an artist like no other yet too we can hear this music in relation to Berio-Berberian's "Voices," Schoenberg's "Pierrot Lunaire" and Boulez "Les Marteau Sans Maitre." The kind of sensibility of these three Modernist masterworks are not lost on Ms. Soper but instead are extended and developed into her very own stance.

The music takes some focused and repeated listens, as I find much worthy music does. But in the end we come to hear this as singular and remarkable. I do anyway! I am in the end impressed mightily by it all. Kate Soper and the Wet Ink Ensemble are both a bonified force in New Music today and this album shows us delightfully the why and how. Listen and travel along to a very special musical realm!
Posted by Grego Applegate Edwards at 9:57 AM