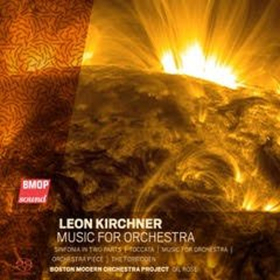 When a new release arrives from the auspices of the Boston Modern Orchestra Project, I generally perk up. It is because I know that whatever they are up to is a good thing, really. So a few weeks ago the anthology of Leon Kirchner (1919-2009) Music for Orchestra (BMOP 1060) was in my mailbox and I was intrigued. I had found years ago the LP of his Pulitzer Prize winning string quartet and have listened with pleasure since, then I have appreciated some music for vocals and large chamber group I found subsequently in the classical bins of the past. But after that I for whatever reason lost track of what he was doing and now to my chagrin I see he passed away in 2009 and I did not even hear about it.

The good news is that this anthology conducted with the usual sympathetic care and enthusiasm by Gil Rose catches us up with some important works he composed between 1951 and 2008. It forms a sort of mini-retrospective. It serves to inform me (and I hope you too) that he was a remarkable force in orchestral music--with vision and orchestral-orchestrational expressivity of a high order.

The jacket blurb sums up what we should consider admirably. He studied with Schoenberg, Sessions and Bloch, which is rather amazing, really. He started with a Hindemith-Bartok-Stravinsky nexus, followed the Viennese school into 12-tome and in the process became someone original. Modern in the high sense, and very substantially musical-inventive.

You listen to these excellent performances and a larger picture of Kirchner gradually emerges. The grand maturation comes with his title work "Music for Orchestra" (1969) and follows with the later sequel "Orchestra Piece (Music for Orchestra II)" (1990). Both works carve out a very original orchestral demeanor that is both Modern and noteworthy at every step. He sounds like the century in which he flourished, surely. And yet he sounds like an exemplar of Kirchner and nobody else.

And the bookended works are nothing to sneeze at either, from the early strivings of "Sinfonia in Two Parts" (1951) which sounds very much as an avant voice of the time, a musical voice of promise. The growth continues in the "Toccata for Strings, Solo Winds, and Percussion" (1956).

In the farewell work on the program, "The Forbidden" (20008) we hear a Kirchner undiminished, fully flowered and poignantly moving forward even at the edge of his life experience.

There is a vital expressivity to this music, a vibrancy, a sureness and an eloquence very much with a kind of honest directness. He follows his muse throughout and does so wisely. For he was someone with a vision of what the present-day could and did bring to the imaginative inventor of tones and textures.

If you take this music as seriously as you should, and spend time in the labyrinths of form and forward movement, you might well conclude with me that this is a sleeper, something that comes in like a lamb, so to speak, but then goes out like a giant! Fee-fie-fo-fum!

Highly recommended. A US composer we should not forget in a finely performed program of gems.
Posted by Grego Applegate Edwards at 9:23 AM