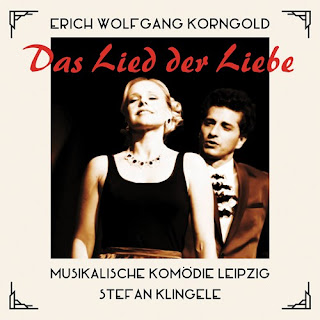 Wolfgang Korngold (1897-1957) might have been one of the greatest composers last century. But somehow things went wrong. He was a prodigy who wrote some wonderful music as a youngster and was off to a good start when the rise of the Nazis made it impossible to stay in Europe. Like so many others he managed to escape to the Untied States. But the teaching that sustained many of the composer-exiles alluded him, it seems. There he embarked on a successful go as a Hollywood film music composer. Much of it was practically successful but undistinguished, save for his soundtrack for "Robin Hood." The serious music he wrote while in exile I have not heard so I am not a good judge, but nothing at this phase stands out.

Nonetheless we still get to hear some of his music in new recordings. Right now we have a new and painstakingly enthusiastic volume of his 1931 operetta, Das Lied der Liebe (Rondeau 6167), which features very decent vocal soloists and Musikalische Komodie Leipzig conducted by Stefan Klingele.

The orchestration shows the sure hand of a master and the pacing is bracing and lively.  However most all the thematic material is based on the Waltz Strauss folks, He reworks the music a fair amount, adds vocal lines most of the time. It is a delightful light-hearted but of fluff. I find myself responding to it almost against my will. This is not work exactly worthy of Korngold, but it no doubt gave him popular recognition. It sparkles in its own way. Since the New Year is often deemed the time for Strauss waltzes, this supplies that need in interesting and sophisticated ways.

If you are Korngold fanatic you should have this. Similarly if you like the idea of an operetta based on Strauss, all the better for you. For the rest of us there my not seem to be sufficient reasons to own this. Try and hear some of the music if you can however. It is quite well done.
Posted by Grego Applegate Edwards at 11:54 AM