Imogen Heap, The Music of Harry Potter and the Cursed Child Parts One and Two in Four Contemporary Suites 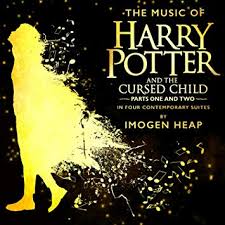 I am happy when someone I have been following musically makes a huge breakthrough. From a purely ego sense it means I was right all along, but that is stupid thinking. It just means it is a wonderful musical moment for me. I've been a champion of women in music I guess since when I enrolled at Berklee College of Music and there were maybe only three women in the entire student body. And every guy enrolled there (? I do not know) was after them, wanted to "date" them! What it pointed toward was that Gustav and Alma Mahler thing, or that Brahms and Robert and Clara Schumann thing. It was a reality that musical people tended to find one another congenial, and in this case as potential mates. This is not important though for the wider picture here so much as instead the fact that half of our population are women and if we are not encouraging those musically inclined then it is OUR loss. We miss all that music. Common sense.

So since then I have tried to give equal attention to the music women make (of course) so wonderfully well when they are allowed to do so! In the midst of my listening and appreciating years ago an old friend who at the time did marketing for A&M Records was kind enough to send me some music that they were putting out just then. One was the first album by Imogen Heap. Wikipedia says that first album iMegaphone  came out in 1998, but that seems very much later than I recall. No matter. I was still living in Butler, I think! At any rate I heard something different and very interesting to me. It was singer-songwriter alternative I guess. But distinct in a very interesting way, I thought.  After that was Frou Frou which was more like 1998 as far as my memory goes, considerably later? I am not here to question anyone. Heap was not a huge success initially. Frou Frou got her considerably more attention. Anyway I followed her musical trajectory with great interest. Right now there is her latest which to me is a kind of a fulfilling of a promise, of an affirmation of her presence and musical brilliance.

I speak now of this new one, the full title of which is Harry Potter and the Cursed Child Parts One and Two in Four Contemporary Suites (SONY Music Masterworks). The album info states that this is an "album performed, engineered, recorded, mixed and produced by Imogen Heap." That tells you that this is "Electroacoustic-Electronic" at base as indeed the keys and vocals of Ms. Heap are very much to be heard as the basic ingredient that is then extended into a full "orchestral" ambiance.

And truly, her music has evolved to this point where we hear a full CD of "serious" music intended for the play of the same name. But aside from that obvious origin (the play, which will not concern me here) this is in fact a real opportunity for Imogen to show what she can do when let loose. It us stunning fare. She has fully mastered the studio to the point that her total sound is in its own way like the Brian Wilson of Smile, with a compositional-orchestrational sense all her own and incredibly imaginative. It is as if the "Prog" of people like the Beatles and George Martin, ELP, King Crimson and Pink Floyd has not been forgotten but instead relives in new form for something that realizes, that achieves the status of New Music, yet the roots of such an evolution are not disguised.

Of course this is not something that sounds like Cage or Stockhausen. It is tonal. But it does not suffer from a sort of patronized dumming down as can be the case out there today at times. It is fully musical, fully developed and brilliant, just brilliant.  So it is with joy that I listen to this again and so again. The studio is the concert venue, as it has been since Sgt. Pepper's when things are right (or for that matter since the early Electronic Music days on). And there is a spurt forward with this music in the logic of that development.

I will not try to describe the totality of what you will hear with this work. It is masterful, cosmically ambient within a kind of maelstrom of expressive thrust. It is in a way a culmination, first off of the sounds Imogen Heap has been working towards, but also of the "serious" side of Art Rock I suppose you could say. It is very beautiful music, very good to hear repeatedly but from the first it grabs hold of you. It is something that was there from the very first Imogen Heap album, an original sense, and she has arrived completely with this majestic work!

Put this into your ear space, but do not expect it to be x or y. Then you will be drawn in, I hope, on its own terms. Do hear this if you can. Get a copy. Listen!
Posted by Grego Applegate Edwards at 8:40 AM