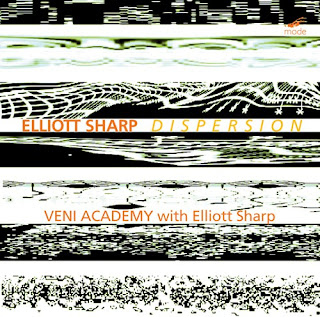 When music is especially simpatico with music you make or might like to make, it is actually harder to write about it, I think. Today that is so. I speak of the new recording of Elliott Sharp's recent works for chamber orchestra, well played by the Veni Academi under Marian Lejava, with Elliott himself on electroacoustic guitar for the final two pieces. The whole thing is named Dispersion, Music for Systems Orchestra (Mode 305).

The key to this music I think is in the name "Systems Orchestra." It is processual music, as Elliott is often very much about. There is a freedom of articulation within prescribed arenas and sound concepts, and so the avant improv element is collectively there. One might look back as a paradigmatic example to Coltrane's "Ascension" as one of the initial models for a larger-band collective outlook. And mind you this does not sound like "Ascension" so much as it breathes the air that we all do in the aftermath of such things.

The music is in part about differing degrees of velocity, of the simultaneous sounding of similarities in their differences, about the seismic experience of material aural reality as a burst of color and light, of sense and "travelling to," of being and knowing through expressive hearing, where the listener is a participant in the creative process by the act of apperception. Those are words I put on how I have embraced the music in the first five listens. It has avant jazz immediacy and then again new music pre-constructions of a will to significant form I guess you could say. And with this music from the vital musical mind of Elliot Sharp is a consistency and a growth in "Modernism" away from the folk-classical model of unfolding periodic melody and its harmony. This is the full liberation from that and a kind of hocket that is not Medieval nor Pygmy in its starts and stops, its presences and absences but rather it unfolds a new motility more like the vastness of the diurnal cycle or the planetary orbits and their this-space-that-space presence.

If that seems obscure then get this album and listen. All I do is approximate what I feel as I hear this very mind-opening music. It is neither so much a one thing or another as it is very much Elliot Sharp music, which is a very important thing. This time now is in part on Elliot Sharp time. Set your watches, put them aside, then listen to this album! I very much recommend it.
Posted by Grego Applegate Edwards at 1:43 PM