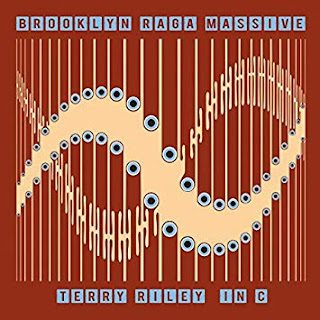 LaMonte Young kicked off the Minimalist revolution but Terry Riley made it live and breathe with his seminal composition In C.  I was happy that my friend Fuzzbee played the record for me in Boston, 1971, and my life was suitably hastened by it all. For those not familiar in depth with how the music works it is a series of phrases mostly within the key of C which fit together remarkably well. An unspecified group of instrumentalists (and vocalists) gather together and with the aid of a constant pulse (ordinarily the piano) they play each phrase as they see fit, together and apart, moving each artist as they see fit to the next phrase until all the phrases are covered. There is overlap continually between where each player starts the phrase and the natural layering that occurs as each group of players overlap in terms of who is playing which phrases at any given point, so long as all follow the sequence of phrases. So the template allows for much spontaneous and even planned variation.

It is a work that gives rise to a wonderful sound provided all the players listen to one another and keep in the flow of it all. There have been rock versions, a Chinese instrument version, and now the Brooklyn Raga Massive give us a (mostly North) Indian Classical version with suitable instruments and vocalists (Northern Spy NS094). In this case, rather brilliantly, the pulse is sounded as a tabla accompaniment.

Terry Riley both as the composer of In C and as improviser, as composer of other later works, in all of this he shows a kind of loose affinity with Indian Classical orientations--drone, modal figurations, etc. And happily the Brooklyn Raga Massive is attuned very much to the attuned nature of In C. They give us a flowing reading that takes the liberty of arranging parts and providing solo space to make it all that much more Indian and bring an entirely new life to the work. They make it all sound at times like some of Ravi Shankar's wonderful film music, for example. And to me that is a very good thing.

And they do so in ways you might have imagined and hoped for when you heard about the project. Or at least that is very much the case for me. It is a triumph of sensitive musical listening and conceptual rigor, so to speak.

It works and it works wonderfully well. So anyone who might think the idea interesting, just go right ahead and listen, buy, make these folks and the dedicated label who boldly goes here, make them be happy to wake up and keep on going forward! Buy it, then. That is what I recommend! Very much recommend.
Posted by Grego Applegate Edwards at 10:42 AM