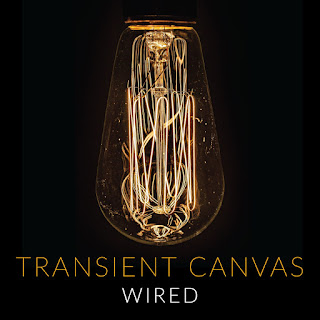 A duo of bass clarinet and marimba is a most unusual thing. But if you think of it beyond the initial surprise, there is a sonorous logic to it. It is not like we haven't heard the combination before. So we have the New-England based duo Transient Canvas and their latest album Wired (New Focus Recordings 218). Amy Advocat plays the bass clarinet, Matt Sharrock the marimba. They are joined by what sounds like ambient electro-acoustics now and again but principally it is these two holding forth nicely in a series of some seven Contemporary New Music compositions.

Sometimes there are patterns to the music that repeat, more in the manner of an Alberti Bass at times, though not exactly, just in the way the pattern grounds the music in something that is then a launching ahead into not-repetitive elements layering into the pattern. There is a flirtation with Minimalism without necessarily a consummation, if you will pardon the turn of phrase. At the same time there are vaguely world-jazz-rock elements (which in a way is another way of saying "not-quite-Alberti"?)

So we get a virtuoso duo series of performances that are always geared toward the aims and objectives of each composition rather than sensation for its own sake, so to speak. The music is consistently absorbing, not perhaps at the cutting edge of the avant extreme, but ever musical and worthy of hearing. The names of the composers may not necessarily ring a bell for you, but this is not amateur hour either. So we hear Kirsten Volness, Peter Van Zandt Lane, David Ibbett, Lainie Fefferman, Rudolf Rojahn, Mischa Salkind-Pearl, and Dan VanHassel.

You who like the sound of these instruments and/or like chamber realms of the contemporary a little bit off the beaten track, this is good bet! Transient Canvas is a happy listen!

Posted by Grego Applegate Edwards at 9:19 AM