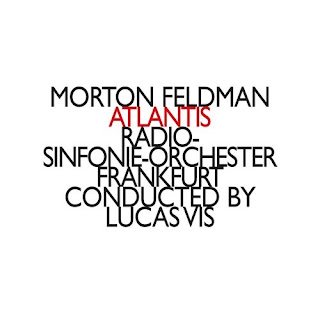 If there were no Morton Feldman work about the lost continent Atlantis (hat[now]ART 206) one would have nonetheless to imagine it. Once you hear of the fact that there is such a thing if you know Feldman you feel like this is a very good idea. After all Feldman (1926-1987) is practically a lost continent unto himself, a visitor from a world we only know by his presence. Though he was a part of the Cage school of course, he also was very much a school of one. I am thinking if there ever was somebody who survived the Atlantis deluge and remained on earth it was him! He was a visitor and we were blessed to have him among us.

There is a Zen concentration to his music that was virtually there from his very first published works. Atlantis  combines in a vibrant program three works from two vital periods in Feldman's development. All three exhibit that concentration. All are fashioned for and can be very fruitfully played by chamber orchestra. The key perhaps is in the variable fashioning. The title work Atlantis (1959) is graphically notated and so it stands out as created out of the murky waters of created destruction, so to say. It scurries and flurries with an insect-like hyper movement and so then stands alongside the more Apollonian later works "String Quartet & Orchestra" (1973) and "Oboe and Orchestra" (1976), which have the more "staid" open-ended mysteriousness, more typically Feldmanesque in the long-run empty horizon quality. And so in a way they seem more typical of a vision of Atlantis? Yet taken all together they flesh out worlds of mystery that never are far from the Feldman vision.

In the liners Art Lange speaks lucidly of how total process of creation with the AB Ex painters determined the identity of work and being--that Cage and Feldman rejected predetermined form as constitutive yet too found critical the overall processual elements in crating up, creating up an oeuvre.

Well in order to come to grips with all of the above you simply have to hear this music for itself. Lucas Vis and the Radio-Sinfonie Orchester Frankfurt give us convincing readings that stand up to repeated hearings and consistently reveal the more of themselves the more we put into the listening.

It is like much of Feldman an extraordinary listening experience--and the two seventies works play against and offset Atlantis to complement it and give us a very absorbing whole. Heartily recommended to anybody with ears!
Posted by Grego Applegate Edwards at 8:19 AM