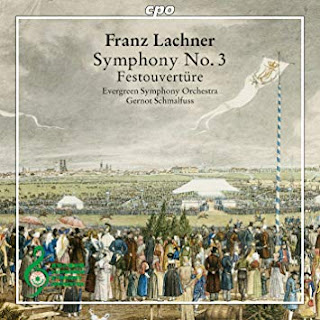 Theoretically there can be no end to the number of music-makers, the number of composers we can hear in our lifetime.  The only limitation is the finite length of a life and the finite number of opportunities there might be to hear unfamiliar music. Now happens to be a pretty good time to explore. And so I have been drinking rather heartily at the well of the unknown. And I try and report in as always.

So this morning I bring to you another composer I at least have not heard before. It is Franz Lachner (1803-1890).  Now who is that? The liners to the CD at hand this morning tell us that during his lifetime he was at the very center of a lively controversy in the German-Speaking world. It all started in 1835 when Lachner's 5th Symphony was chosen by Concerts spirituels as the best among 57 symphonies submitted for a competition for the best unperformed new symphonic work. After its premiere one journalist praised it, calling it poetic, but Schumann (then a prominent music critic) retorted, characterizing it essentially as style-less and bloated.  A journalistic battle royale ensued between virtually all-and-sundry musical spokesmen of note in the German speaking world. The music public greeted the Lachner's Fifth with the clamor they had given for Beethoven's Ninth and a recent Spohr symphony, according to the liners.

Fast forward ahead to today, where most of us know nothing of the hubbub on Lachner's 5th that seemed so central then. Franz Lachner is not someone we include in the standard repertoire these days. In fact his music has sunk into a true obscurity.  I myself have never come across his music at all until now.

So we have the chance to consider him with a new CD at hand, a recording of his Symphony No. 3 (CPO 555081-2) (op. 41 in D minor), as performed by the Evergreen Symphony Orchestra under the direction of Gernot Schmalfuss. The most obvious thing to note is that the 3rd with four movements each lasting over ten minutes in this performance was pretty long for its time period. It does go on. The music does not seem at all "bloated" however. It is well constructed, perhaps not as thematically stunning as some other, more familiar works of its time. But then as you listen a few times it is in no way aimless. With often a pretty dominant string presence it is not especially daring orchestrationally, in the way the parts are apportioned. That of course was a critique we might still hear about the symphonies of Schumann himself. In neither Lachner's case here nor in Schumann's case does that bother me. And there are enough spells in this Lachner 3rd where the winds have enough of a say that it is not unrelenting.

Some of the contrapuntal passages in the second, scherzo movement to me are compelling. And there is a Beethovinian-Brahmsian bravura fanfare kind of aura that one cannot say is unpleasant, far from it.

Added to the program is Lachner's fairly brief "Festouverture in Es-Dur" to conclude things. It ends in the version here with the present-day German national anthem (there is another version that ends elsewise). All fine and dandy and well done. Papa Haydn incorporated this melody, ,the then-Austrian national anthem, into a string quartet so there is a precedent. .

At any rate one comes away from this quite decently performed program with the feeling that Lachner deserves a hearing. He is not in any way inferior as a craftsman. The questions will be for you, will you like the music? I like it just fine. It does not yet strike me thematically like some of its contemporary parallels, but then I may need to live with it a while longer.

Surely anyone interested in the post-Beethovinian 19th-century musical climate should hear this recording and learn something. Perhaps with a few listens you will come to love this music. It is not unlovable! Recommended.

Posted by Grego Applegate Edwards at 9:08 AM