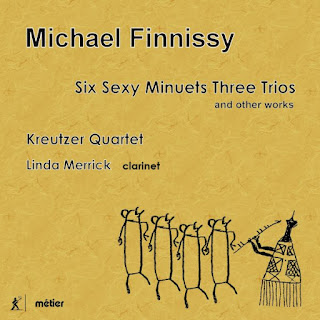 One of the real joys of hearing most all the new Metier releases is getting the chance to explore many releases in their ongoing series on the music of Michael Finnissy. And the latest release has me smiling ear-to-ear because the music is especially good. I speak of the album of chamber music called Six Sexy Minuets Three Trios and Other Works (Metier 28581).

It is a nicely performed set of a couple of miniature gems and three major chamber offerings. The latter consist of the title work, plus "Civilization" and "Clarinetten-Liederkreis." From the opening bars of "Civilization," we are in the presence of a very Neo-High-Modern, Neo-Classical; or even Neo-Early sensibility. And the rhythmic strikingness of the first movement reminds us that Finnissy has neither ignored the Neo-Classical Stravinsky nor has he chosen to follow in his footsteps in any obvious way. Like Stravinsky there is an irresistible rhythmic drive yet is is all Finnissy, all the way.

The Kreutzer Quartet with Linda Merrick joining for one work on clarinet have a real feel for, a real understanding of the quirky, funny yet very serious way of this music. The moods vary in many ways throughout. And so in a way the old idea of a portrayal of the "four humors" in art is not entirely out of place, though perhaps not intended exactly either. The ghost of Papa Haydn and even Henry Purcell and John Dowland is not all that far. You feel they might be listening, asking thsemvlces, "what is this fellow up to?"And in the end you walk away from this program with a distinct feeling that Michael Finnissy is one of our living greats, that no one precisely has his expressive
referentiality, his ability to point backwards and in so doing pointing forwards because the pointing is multi-directional and entirely idiomatic to self.

Listen to the six brilliant movements of "Civilization," the pithy, startling mix of early and late on "Contrapunctus XIX," the refreshingly moody and tart "Clarinetten-Liederkreis," the romping, slightly unhinged "Mad Men in the Sand," the hauntingly wry, reflective and avant-brio "Six Sexy Minuets Three Trios" and you will find yourself on unique turf. Finnissy manages to get some of the string wielding ways of earlier chamber music evoked but yet with the unabashed adventurism of the 'future" as it were.

I am happy to say that (to me) this album stands out as a triumph in the chamber arts of Modernity today. Finnissy is a true voice of our times. These are some superb examples of why it is a fine thing to be alive and greet the morning with a little hope. We will end up leaving some good things behind for others to appreciate after we all are gone. I would venture to say that this music may well be remembered long after some other, less happy things are forgotten.

Strongly recommended to all who wish to embrace the Modernism of now.
Posted by Grego Applegate Edwards at 7:29 AM