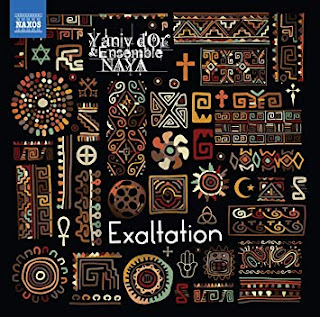 Lest we forget the impact of the Judaic and Islamic diaspora on Medieval Europe and beyond, there is the recent Exaltation (Naxos 8.573980). Countertenor Yaniv d'Or and the stylistically diffuse and musically astute Ensemble NAYA give us a follow-up to their earlier Latino Landino (Naxos), which traced the musical heritage of Sephardic culture following their tragic expulsion from Spain along with the Muslim population after 1492. This new sequel casts a wide net from Medieval and Baroque Europe, Turkey and the Mideast to recreate a music of self-determination and movement, joy and the proud certainty of a pluralist identity in a volatile world. I have yet to hear the first volume but I can most certainly vouch for this one.

The music reminds us that reconstructing the Early Music world can sometimes be like creating an entire dinosaur from the material presence of just a finite number of bones. We know of course a fair amount about performance practices in the earlier forms of music over and above what was physically written as melodic line and lyrics. This of course is a vital concern outside of the music of the church in early Europe and beyond, since the musical lifeworld then did not think it necessary (or perhaps even possible) to preserve the spontaneous folk moment of a particular performance. Moreover the background knowledge of such practice of course is not infinitely available to us nor is it generally prescriptive for any given song.  It is a fact that increasingly imaginative arrangements are now the rule in Early Music performance practices to make up for that lack, so that musical traditions are recreated as much in the present as they are reconstructed out of the past. We imagine the world then as, shall we say, as "ethnic" as it ever has been in our own world. So we can imagine, for example that a drummer in such an ensemble might play a complex role in the music, may have at hand a set of techniques and may create a variety of variable sounds such as we find still the case in living World Music traditions today. Similarly in the early ensembles the overall instrumentation itself and what they were made to sound come alive in recent times via an imaginative reconstruction of what we know of the period and the survival of traditions in the original homes of the diaspora movements.

So all that holds true quite nicely in Exaltation, with a fascinating blend of some 16 diverse pieces, centering on Yaniv d'Or's accomplished and beautiful countertenor vocals and an ever shifting set of ensemble instruments and parts that imagine a world as exotic and as excitingly, timbrally rich as it no doubt was in real-world, local performance situations. So the flamenco guitar style rubs shoulders with the hammer-sounded equivalent to the santur, the dumbak and ney flute take their place with other more typically Medieval European instruments. All this makes the program both highly attractive and imagines nicely for us the exotic, less easily transcribed timbres of the music as it no doubt sounded at the time, though of course some positivist surety may never quite exist save the discovery of the time machines that would allow our senses to recreate the period exactly as we might experience it!

The music has great beauty and memorability and there is a fitting relevance today to programmatic themes of exaltation, the joy in life and the fervent wish for peaceful co-existence. We might still find such aims a worthy goal in the world today, surely.

This is music one may take some acclimatizing to appreciate fully. But then too it gives you yet another avenue into the self and other as connected to our own and other's musical heritage and traditions, the delight of discovery in the possibilities musically the past gives to us, and the ever cross-fertilization of musical and living cultures in motion. There is a joy in musical joy and there is the joy of discovery the music offers us readily. This album has both joys available to us in a happily generous quantity and that is surely a good thing.

Beautiful! Very recommended for all adventuresome souls. And a must if you keep up with Early Music realms.
Posted by Grego Applegate Edwards at 11:10 AM