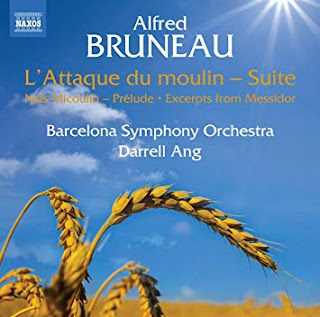 Are we being exposed to too many obscure Late Romantics lately? It is possible that I am. But then I want to know all things musical, so I do ask for it.  And how about some more Ernest Krenek somebody? All this is not so relevant today with Alfred Bruneau (1857-1934) because though he is pretty obscure and sometimes indeed rather Late Romantic he is in a French way also Pre-Impressionist with orchestral luster and twinkle and not all emotive gigantism. Not so much, just a bit. Or so that is at least the case on the new CD L'Attaque du moulin - Suite (Naxos 8.573888).

Darrell Ang and the Barcelona Symphony Orchestra give is a boldly engaged reading of
L'Attaque (1893) plus the Prelude from ACT IV of "Messidor" (1897), the Prelude from ACT I of "Nais Micoulin" (1907) and Tableau I "La Legende du Or" from ACT III of "Messidore" (1897). There is a mood-setting, pictorially evocative strain to all this music, which is fitting as the works we hear function in several of his operas to set scenes. or in the case of the Suite there are three movements joined together as a "drame lyrique" that conjures a rustic world quite livingly pictorial.

The liners call his efforts a kind of "natural theatre," a realism he shared with his friend Zola. Of course such things are more clearly contained in the overall sweep, in the libretto and dramatic arch of the full operas. And that for the sake of this program is not entirely here nor there. It does serve to frame the music that we do hear and is not at all irrelevant since the pictorialism is (one can suggest) an aspect of naturalism I suppose. So it is important to it keep in mind regardless.

The influence of Wagner is to be felt throughout, but then there is something else that the liner/blurb calls appropriately "Gallic." Yes! He was a pupil of Massenet and one can find a bit of that if one looks for it.

In all however there is something quite engaging in this orchestral music that gives us an original streak. He is to turn-of-the-century France as much perhaps as Ries was to early 1800s Austria (see my 11-23 review article of several days ago for that). That is, both were a solid and singular voice of their era who we have in large part forgotten today.

Ang and the Barcelona Symphony handle these brilliant orchestrations with the attention to detail and faithfulness of execution appropriate to Bruneau's way.

I would not hesitate to recommend this to anyone interested in the French scene as it was at the first sunrays of the dawn of the Modern Era. I am glad myself to have it and to hear it.