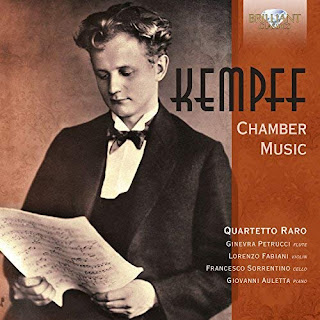 Many of you who are classical enthusiasts might well recognize the name of Wilhelm Kempff (1895-1991). You may remember his presence as a master pianist. You may have some of his recordings as I do. Chances are you did not know of his composing, nor for that matter did I.  All that can be remedied with a new program of some of his Chamber Music (Brilliant 95629), played with a bit of panache by the Quartetto Raro.

Right off the bat I was impressed by the lyricism and poise of these two works. They are in a sort of Late Romantic vein, yet much does not at all strike one as potboiler or boilerplate but rather distinctly musical in its own light, its own right. If you listen a few times the music jumps out of the CD and invites you to contemplate it. There is a kind of statue-esque way the flute, strings and piano interact together, or for that matter the strings and piano. The music involved is his "Quartet in G Major" for flute, violin, cello and piano and his "Trio in G minor" for violin, cello and piano. Neither work is lightweight in any sense. Nor is it chamber music that should have stopped the hands of time itself. It is nonetheless very enjoyable music to hear, and shows that Kempff's own music well deserves our ears.

Brilliant is one of those labels who for a very modest cost provides us with exotic and nearly always interesting repertoire options. The Wilhelm Kempff disk is a sterling example of how good but unfamiliar music can be had out there for a very small investment. This is not at all a typical Late Romantic offering by an also-ran. It is original and does not Schumann or Chopin you to submission! It is something new-old and worthwhile. Recommended.
Posted by Grego Applegate Edwards at 10:13 AM