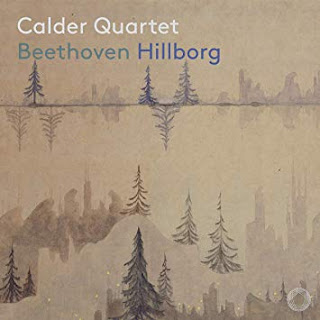 When the very classic joins the modern on a single program, one compares two worlds and gauges the "now" with the "then." Or at least one is invited to do so. This morning I am contemplating a recent CD by the Calder String Quartet, a most lively and accomplished group who present an unusual program in their recent album entitled Beethoven Hillborg (Pentatone 5186718). On it we get an early Beethoven Quartet, the String Quartet in D Major, op. 18 no. 3 (1798-1800), a late one, the Quartet in C-Sharp minor, op. 131 (1826), and then a rather recent work (2006) by Anders Hillborg  (B. 1954), the "Kongsgaard Variations."

What I can say straight off the bat is that the music hangs together as one concert, so to speak, and with repeated listens I have been smiling a good deal as I hear. The Quartet tell us how the music specifically relates together in the liners.

The Beethoven op. 131 of course is one of the most celebrated in the repertoire for good reason. The Calder Quartet has found in performing the complete Beethoven Quartets that the op. 131 overwhelmes them with admiration for how deeply it cuts, how much in the space of just 30 minutes it traverses a very long expanse, as they note "fugal writing, harmonic explorations, passages filled with operatic drama, and a grand set of variations into seven movements."

The earlier Beethoven Op. 18, No. 3 they note is nicely contrasting in its Classical form and stands out for its evocation of sunrise and a journey.

The Hillborg bisects and intersects both Beethovens, because it is a set of variations for one thing, and too because it reflects a tonality, depth and lyricism not at all alien to the Beethoven Quartets here. Perhaps most important is the principal theme of the work, which is stated only at the end. It is the Airetta theme from Beethoven's final piano sonata op. 111, which Hillborg found was actually notated on the label of a California wine he came across. That inspired him. So all the more apt! Everything both fits in with and paves the way for the masterful complexities of Beethoven's Op. 131.

As to the performances, they are warm, very personal and intimate in keeping with the tenor of the music. If you know the old Budapest Quartet recordings of these Beethoven Quartets, it is the Calder Quartet's way too to fall on the warmer side of the performance possibilities. They are enough of the "Old School" to have it that way, yet quite brio too when n called upon and a little less "intemperate" in the way they express the emotional content of the music--so more modern, more in keeping with a crisper structural exegesis of the music that is more what we tend to be about today.

After quite a few listens I must say this is a program that brings a lot of pleasure to me and also nicely reveals something of the chamber music side of Anders Hillborg. The Calder Quartet are impeccable in all the performance details as well as joyfully broad stroked in the happy feeling of making this music together. Everything conspires to bring you a happy, very happy musical time.