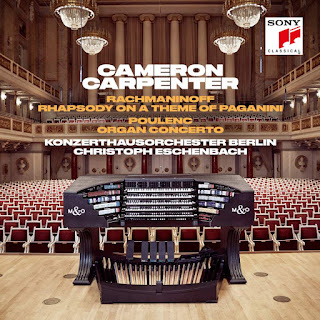 I suppose Modern organ music is not necessarily for all who breathe. There was an old Gerd Zacher organ LP that might have sounded positively infernal to the uninitiated. It was meant to. Blame old movies, from The Phantom of the Opera through House on Haunted Hill.

Regardless, organ virtuoso Cameron Carpenter gives you plenty to like on his new recording of Rachmaninoff's Rhapsody on a Theme of Paganini, Poulenc's Organ Concerto and as a bonus the final movement from Vierne's Organ Symphony No. 1 in D minor (SONY Classical 8985390822). The Konzerthausorchester Berlin under Christoph Eschenbach joins with Carpenter on the two main parts of the program to make a joyful noise indeed.

The first thing you notice is the superb recording quality of the CD. It jumps out of the digital world into your space with strength and animation. If anyone cared nowadays to show off their system this would make one heck of a showcase I suspect. All that would be meaningless if the performances were not equal to the reproduction. They are. They are filled with magnetic energy and explosive sonics. Carpenter's International Touring Organ sounds wonderfully well in his hands and the orchestra stays with him as they pivot and twist through the soundscaped stratisphere.

Those who think they know Rachmaninoff's "Rhapsody on a Theme of Paganini" will be surprised with the new life Carpenter gives it here in the World Premiere Recording of his version for organ and orchestra. It is ultra dynamic as one might expect, with a generous helping of all the aural cranked power that one might hope for and a very nicely orchestrated whole. It is as impressive as it is endlessly fascinating to hear.

Francis Poulenc's "Concerto for Organ. Strings and Timpani in D minor FP 93" is pretty much my favorite such work and undoubtedly the most captivating of all such configurations in the 20th century to my mind. There is extraordinary thematic profundity to be heard throughout and a near perfect meld between organ and orchestra that this recording brings out like no other version I have heard. It is marvelous and exciting! If you already love the Poulenc you will respond readily I would suspect. And if you do not know it yet this is the perfect way to hear it. It reminds us that Poulenc was never content to be anybody's trend follower. If he longed at times to create deep pools of tonal presence, he was going to do it and to hell with how "Modern" it was, though it was and is in its own way. This is a hell of a noisy row at times. And it is true that it is lovely to FEEL such aural power. This is music that was meant to produce, as Harry Partch said about his Marimba Eroica, "a ripple in the backside!" If your woofer(s) is/are ready for it, let the ripples begin!

The end is glorious with Vierne's short but majestic allegro from his First Organ Symphony.

Carpenter is a real player in the most dramatic and presentational sense. This CD is a wonder of its kind.  Organ music ideally should sound thrilling, and so on CD today one hopes it will. It does here. So get it. If you can. And let it rip.
Posted by Grego Applegate Edwards at 8:38 AM