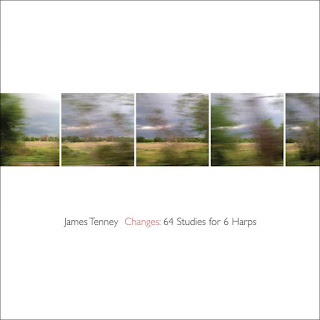 James Tenney (1934-2006) is an American, specifically a North American composer whose time is perhaps here? If so the current release helps mark that arrival? Why all that on a Monday morning, no less? Because this music is due. Initial avant fame can be gained as apart of a "school." so Darmstadt, Cage and his main followers, the second Viennese school, first-wave "Minimalists," etc. Some do not exactly belong as a lumping together, and James Tenney does not exactly lump well? That explains some of the late recognition, maybe.

The work before us, to give it the full title, Changes: 64 Studies for 6 Harps (1985) for Udo Kasemets (New World 80810-2), comes to us in long form, the 1985 equivalent of script. It fills two CDs properly and nicely and it goes on for some time. It has the torque of a-thematic expansive complexity, of non-folksiness and that enables it to extend its presence for a longer time without becoming at all wearisome (or alternately if you do not have new music ears it ALL is wearisome. but then that means no doubt that the person you are has a problem with "New Music"? No shame. That is how it can be.)

There is a certain very subtle inevitability to this music, brought on in part by what Tenney zeroes in upon, three factors. They are 1.) Deep explorations of harmonic space and not in an elementary harmonic way, 2.) Stochastic process on more than one hierarchy level, and 3.) Parametric profiles in combinatory ways. So as we listen we get a sensibility not obvious to the naked ear but nevertheless leaving in the listener the feeling of landing on the "order" side rather than the "random" one? Perhaps that only after a bit. One's ears nee to adjust first.

So for the parameters of the first study there is for example a medium-to-high dynamic level, a temporary density low-to-medium, and a medium-to-high pitch range. The I Ching helps create heightened variability and so also gives a nod in Cage's direction. A "dissonant counterpoint algorithm" moves the timbral combining along to a qualitative Modernity so to say. We get a heightened sense of pitch throughout and a sheer sensual pleasure from the intertwining of six harps endlessly permutating.

The sense of control as one might gain from the Serialists collides with the open set Cagean possibilities of chance, and so Tenney pledges absolute alliance to no camp save a Modern exploratory one. The performances and recording ambiance are what one would expect, would demand. And the music is fascinating and fertile.

All you confirmed High Modernists take note of this one. And anyone who loves the harp will no doubt be happy to hear all this concentration of stringed particularity! Very strongly recommended.
Posted by Grego Applegate Edwards at 10:01 AM