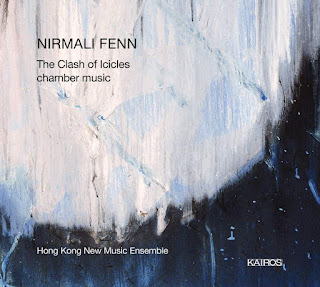 Nirmali Fenn? Born 1979, right while I was at New York University. So an auspicious date, as NYU was good to me and I look back to it as an age of personal miracles, though like any age it had down sides too. But really, Nirmali in addition to and irrespective of her earth-entry year comes to us with a volume of chamber music and a good thing it is. The Clash of Icicles (Kairos 0015055KAI) is the very intriguing title. I have been listening. The music is spacious, Modern and rather dramatically Eastern, and what does that mean? Well she resides in Singapore right now so maybe I am reading into things? Yes, no, maybe.  So there is gestural space and silence that strikes me as being at least partly "Non-Western." That is on the works represented on this program.

We hear six in all. The two with accordion ("The Clash of Icicles Against the Stars" for accordion, flute and Chinese sheng, and "Through a Glass Darkly" for clarinet, accordion and trumpet) sound at points somewhat ethnic. Now I mean that as in "folk-like." Perhaps it is true in part even of the others here, "A Highwire Act" for violin, cello and piano, "Scratches of the Wind" for solo alto flute, "The Ground of Being" for flute and alto flute, and "A Reaction in Force" for solo oboe. On the other hand there is a definite New Music Modernism to be heard, more narrative Crumb-like than wholly abstracted Webernism. There is music that seems to want to mean as much as sound, not just fill the air but leave behind a musically enshrined tale, a little bit of a story that we can think about, not in some obvious way but there somehow, beyond words.

And true also that it sounds like feelings and moods are part of the musical world. Not in obvious ways, yet one feels like things have a telling to them, not just a sounding. So with ancient Chinese music that may be a sound description of, say, an "ambush" for example. Only this is not so obviously literal.

The composer tells us specifically what the "meaning" musical expressions are about in the liners. These 2008-2014 works are addressed to the physical spaces she occupied and their human and natural foundations. So living high up in a high rise in Hong Kong overlooking the sea form parameters for the Clash of Icicles against the Stars. Dramatic thunderstorms in Singapore also figure in some of the music. You should read the liners to this album of course as part of understand the music. I will not try and reproduce it all here.

This music can be quite tonal and sometimes less so. If it is more about the sounding and spacing than the notes in themselves that is perhaps something we have today, a trait for a new Modernism that is timbral and spatio-temporal, or a sort of spacetime thematic resonance? Nirmali Fenn gives us a musical poetics of such things and it sounds convincing and honestly expressive in ever successful ways. The performances are detailed and committed.

I would love to hear her larger ensemble music now at some point. And I feel like the chamber end is the good place to begin, assuming there are bodies of orchestral things as well. I feel a real humanity breathing through this music and it is by no means unwelcome. Very recommended is this, if you want a different angle on New Music possibilities today.
Posted by Grego Applegate Edwards at 8:08 AM