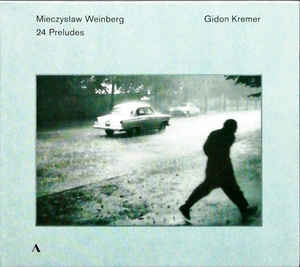 If we are properly connected to the flowing stream of new releases and if we are paying attention then every day holds a good possibility that there will be evidence in hand of the measured meeting of music and artist, a time vector of coming together that holds significance if we are alert to it and spend the time understanding what it has become for us.

This most definitely is the case today with the synergistic intersection of Mieczyslaw Weinberg and his 24 Preludes (Accenus 50478) as played by Gidon Kremer on the violin. A few critical preliminaries before getting into the feelings and thoughts this recording engenders in me. First, Weinberg wrote the Preludes for the cello master Rostropovich, and so they were intended for the cello initially, published as Op. 100. For some unknown reason Slava Rostropovich never performed them. Kremer came under the spell of the music and several years ago began transcribing the works into the range and assuming the logistics of the contemporary violin. It is these transferals that we hear in the present recording.

Those are the facts. Hearing Kremer play his violin transposition is hearing yet another Weinberg masterwork, a remarkable set of miniatures that brings to us the rooted intelligence and brilliance of Bach with Weinberg's pronounced, poetically "stern" ecstatics stating another musical universe parallel to Bach's. Each Prelude has very much character and each stands as itself both by itself and together with its others. There is no better a place to linger in the singular melodic-structural world of Weinberg. The Preludes become very much violin music in Kremer's hands and so all the better for the results give us a ravishing whirl through milestone music and performance.

Do not let the opportunity pass you by to hear and get this album. It is bracing, beautiful, in its way perfect Weinberg!
Posted by Grego Applegate Edwards at 9:50 AM