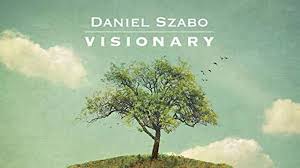 I try and keep my ear to the ground and listen for the noteworthy New Music that comes our way. I must say that Daniel Szabo's album is one of those I am glad I received and listened to, for it is a beautiful surprise. I speak of his album Visionary, which has the telling subtitle New Music for Jazz Trio & Chamber Ensemble (Fuzzy Music PEPCD026). It is a valuable foray into what was at one time called (by Gunther Schuller) "Third Stream Music," or in other words a kind of hybrid form that incorporates Modern Jazz and Modern Classical. Since as we know since the Pre-Socratic philosophers that you "can't step in the same stream twice," it is not the same music that the MJQ, Giuffre, Claire Fisher or Anthony Braxton fashioned for us (and Braxton continues to do, happily).

It is music special to Daniel Szabo. It is well worked out, well arranged (listen to his version of Wayne Shorter's "Infant Eyes") and well composed. The premise is to begin with a core Piano Jazz Trio of Daniel Szabo on the keys,  Edwin Livingstone on bass (with Mike Valerio substituting on "Infant Eyes") and then Peter Erskine on drums.

This is a lively and well heeled trio. Now add to that a chamber ensemble, a sizable small outfit that features string quartet and seven wind players (including tenor sax/flautist Bob Sheppard).

The music shows Szabo to arise deeply out of a Modern changes-oriented Piano Jazz, post-Bill-Evansian, post-Herbie-Hancockian and highly evolved. There are brilliant trio passages that show him to be a first-rate improviser and a brilliant trio leader. But then the chamber parts show a detailed "visionary" feel for how the New Music and the New Jazz can mesh together with perfect equanimity, with a common syntax built up out of an inner need more than some practical project orientation. The music is organic in critical ways so that the synergy of the "fusion" breathes freely and in ways that seem natural to the nexus Szabo forges.

It is impressive music, involving, evolved and ready-to-hand for a challenging and most happy series of listens. Szabo gives us stimulating and exciting fare! Listen.
Posted by Grego Applegate Edwards at 8:00 AM