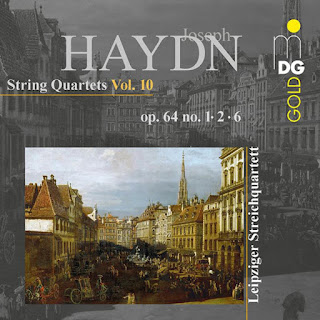 It is fair to say that Joseph Haydn (1732-1809) did more to give the String Quartet the sublime form we know it in than any other early practitioner. The classically proportioned Leipziger Streichquartett has embarked on a very ambitious endeavor of recording the many such works he penned during his lifetime. I report in on the recent String Quartets Vol. 10 (MDG Gold 307 2093-2 ), which covers Haydn's op. 64 nos. 1, 2, and 6.

The recording gives us spacious, unhurried and focused performances of the three quartets. Haydn after the death of Prince Esterhazy in 1790 was freed of his considerable duties as the court conductor, given a lifetime pension that provided security and freedom, and moved into Vienna's artistic-musical life with a vengeance and intensity denied him during the many years of court service. The op. 64 quartets were a product of this liberation and they bustle with the energy and elation he must have been feeling. They followed in the footsteps of his breakthrough op. 33 quartets, which Haydn rightly considered as milestone forays into a style of quartet writing he had much to do with forging.

The performances on the program have an unpretentious frankness about them. They are four-square and with all the straightforward eloquence one might expect from a Quartet outfit who are clearly and tellingly committed to the Haydn style and outlook. Every movement bristles with an abundance of content and we get a long and significant look of the three works the way Haydn himself would have no doubt been pleased to hear them played.

This is demanding music that pays you back with some brilliantly crafted continuances that are as detailed as a teaming pastoral landscape. It is worth every penny it costs to purchase (not that much) and gives you as much or even more thematic profundity and transformative form as you could ever want in 70 minutes. Haydn was a supernatural musical voice in how much he wrote and how brilliant his music was. Mozart had his living match then. We should never take this music for granted. Get this!