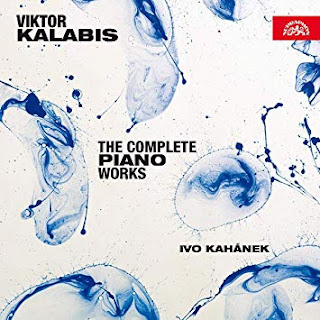 When exploring a new and unexpected release, one question to ask yourself is, "what would change if this was never made?" The answer today is that "in that case I would never know about some very important music in great performance!" That of course tells you that Viktor Kalabis' The Complete Piano Works (Supraphon 4259-2 2-CDs) as performed by Ivo Kahanek has something going for it!

This is a lot of excellent music to live inside and Ivo Kahanek plays it all with the fire it needs. Viktor Kalabis was born in 1923, passed away in 2006, so he was center into the 20th century and his music reflects a personal response to how things were. He was one as the liners tell us who was forced to delay his advanced schooling while the Nazi occupation took place in Czechoslovakia.With the communist takeover of the country in 1948 there were other concerns to be aware of, naturally. The liners make note of the twin poles of Social Realism and Structural Exaggeration from the Second Viennese School, neither of which dominated Kalabis' compositional outlook. Petr Veber rightly sees Kalabis as an original amalgam of the classics plus Janacek. Bartok, Stravinsky, Prokofiev. Hindemith and Martinu. At times the Neo-Classicism and Rites of Stravinsky is a prominent influence and Hindemith can loom large too.

The first disk gives us plenty to absorb in the Piano Sonatas of 1947, 1948 and 1982. Each seems fully formed and very Modern-Expressionist in the best senses. If you knew nothing of Kalabis, this would get your attention no doubt as it did mine. There is much of a pianistic sort, nicely wrought and dynamically exciting. Just these alone give you a Modernist of the first rank, some music that should be more widely performed. In the meantime Kahanek gives us a high benchmark of how one might approach it all.

Disk Two gives us six additional works from the later period, 1967-1999. They reveal different aspects of the composer's interaction with the piano, with the very last works sounding very Stravinskian but not in any actively obvious way. And they are nicely challenging for the performer and thus maintain interest in that way as well.

There is so much to like in this set that I do not hesitate to recommend it to you without reservation. If the piano and the Modern resonate with you, this will no doubt help float your boat this season.