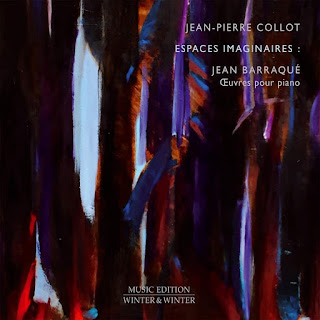 The opening, nearly 40 minute "Sonate pour piano"  (1950-52) is the most remarkable of the eight pieces included in the program. It deals with a non-tonal sequential palette.where the first movement creates an uncanny sort of complex unfolding fascinating to hear. Movement two is a more conventional 12-tone uncovering that nonetheless keeps one interested.

The works that follow are all early works from 1947-49: There is a bit for piano from Wagner's Tristan and Isolde, specifically the waiting music from act three transcribed for solo piano. It  sounds as modern and expressive as it is. Six 12-tone or tonal pieces follow, none not of interest. Each shows an expressive aspect of the composer, whether it be "Intermezzo,"   "Deux morceaux," "Theme et variations," "Piece pour piano," "Retour," or  "Mouvement Lent."

All are well played by Collot. Taken together they give us a picture of the unfolding musical development of Barraque the music conceptualist and his embracing of Modernism. It is a nice program and of interesting to anyone following the long developmental chain of new music in the 20th century. Recommended.

Posted by Grego Applegate Edwards at 9:40 AM