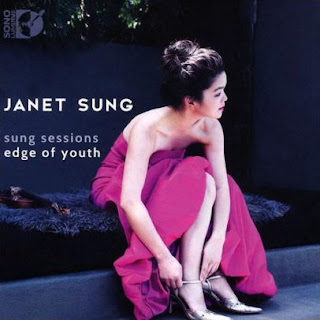 When it comes to the striking tonal dramatics of the five works on Janet Sung's Sung Sessions, Edge of Youth (Sono Luminus 92230), they must be played extraordinarily well or be left absolutely alone! It is not exactly music that sounds pretty just hanging there because it thrives only
by being spitooned into the stratisphere with heart and fire. It is a series of virtuosi works for solo violin or violin with piano. And it is ideal for the musical temperament of Janet Sung, who means all she plays on this very diverting program.

Her violin soars and climbs to the heavens in music that has gestural heft well beyond the Romantics, that instead enters realms that are in their way inimitable. Take the refreshing countenances of the two works representing non-conforming last century voices that fit with special care into their own musical worlds.  Britten's 1935 five part "Suite for Violin and Piano" and Enescu's 1940 "Impressions d'enfance" make their own special place.  Both are folksy in a not entirely obvious way and wonderfully spun by Ms.  Sung.

So also the three works of this century are meant to be showcases for a violinist of the right temperament, not so much a "show off" as one totally dedicated to expression, to how "we" all might at times feel just now. And then too, how the violin can sound right now. And that goes for either way--the intricate interactions between Sung and Wolfram are something special, but then so is Sung unaccompanied.

And so "Dissolve, Oh My Heart" by Missy Mazzoli (2011) for solo violin, "Rave-Up" by Dan Visconti (2012) for Duo and "Sleeveless Scherzo" by Gabriel Prokofiev (2007) for solo all have a special life that makes the musical form taken transcend typical Classicism, Romanticism or Modernism. It is all in  a "folkish" now, on some level.

Janet Sung has a true musical personality on violin and she and Wolfram form a wonderful rapport in this very appealing set of works both earthy and sophisticated. Latch on!
Posted by Grego Applegate Edwards at 10:35 AM