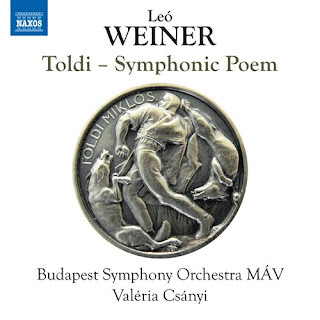 At this point in my experience of the music of Hungarian composer Leo Weiner (1885-1960) I am in no position to say anything synthetic or cumulative. I reviewed a nicely performed earlier installment of the Naxos series at hand some three years ago (see March 18, 2016 posting). Now I am back with another, also well played, and it verifies that Weiner had a definite knack for lively descriptive orchestral adventures with a sure hand at scoring in colorful ways.

You can hear that on the CD today, Toldi - Symphonic Poem (Naxos 8.573847), being Volume Two of the Complete Works for Orchestra. Toldi bears the significant descriptive subtitle Twelve Orchestral Pictures after the Epic Poem by Janos Arany, Op. 43 (1952). And so in the hour-long traversal of the music on the program the attentive listener has a wealth of  some twelve wide-ranging movements to experience and assimilate.

This is music with a kind of Late Romantic aura which stands out for not being so much beholden to Wagner, Strauss or Mahler. And in my first listens I knew as I heard that this came out of a stylistic complex I had been immersed in for years, yet it did not hit me at the very first what I was recognizing in the music. But then it did. This music loosely follows in the path forged by Franz Liszt in his numerous (12) Tone Poems for Orchestra.. It is latching onto the pre-Wagnerian world that Liszt occupied so singularly. As we listen to Weiner's 12 "pictures" in sequence we have a particular approach to how music can by itself cogently narrate a set of meanings and visions.

The liner notes remind us that Weiner studied with Hans von Koessler (as did Donanyi, Bartok and Kodaly) and absorbed the Brahmsian view of the Romantic possibility. He went on to in turn be a prominent teacher in his own right and a widely performed composer, yet by the time Modernism was becoming firmly established as the dominant way of the early 20th century he found that his own personal view of music was at odds with how things were going. He underwent an aesthetic crisis. stopped actively teaching composition at the Franz Liszt Academy and eventually found a way through the quandaries with a pronounced emphasis on Hungarian folk themes.

However Toldi was significant for his output then because it did NOT have the folk-themed approach. And as we become familiar with the work it is perhaps all the more uncanny in its thoroughly non-Modern view of music. In a world where increasingly the music scene was measured by its involvement or non-involvement in Modernist trends inevitably Weiner was viewed more as anachronism than bridge-builder.

As the dust settles on the first half of the 20th century we can begin to set aside at least temporarily the Modernist teleology and listen to Weiner on his own terms. If we listen to Weiner as Weiner we hear a true artist,  a Hungarian composer who does not deserve to be forgotten, and in the current volume an ambitious orchestral work that holds its own despite being something less than indispensable to the progressive teleology of a music history narrative. It is music so historical now as to be outside the dominant historical narrative altogether. And on those terms it is quite well put together and imaginative.

So give this one a chance if my description appeals to you.
Posted by Grego Applegate Edwards at 2:00 PM