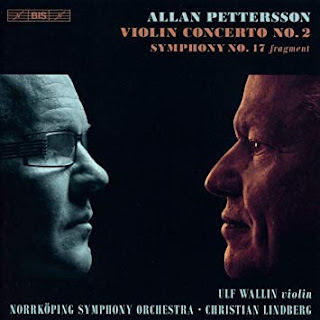 The music of Allan Pettersson (1911-80) is something, the composer himself once remarked, like the films of Igmar Bergman. Both capture a very certain mood, not happy exactly, but undeniably aesthetic, transcendant perhaps, reflective in a rather timeless way.

He was trained as a professional violist but gradually was attracted to composition, studied with Karl Berger-Bloomdahl, and then in Paris during 1950-51 with Honegger, Messiaen, Milhaud and Rene Liebowitz, the latter being especially decisive to his development. From that point forward he was a full-time composer.

The CD at hand today covers some of the last works, namely his Violin Concerto No. 2 (1979, revised version) and the existing fragment of his final Symphony No. 17 (BIS 2290 SACD).

The Norrkoping Symphony Orchestra under Christian Lindberg do the performance honors as they have for some excellent recordings of his works (see my reviews of their versions of his Symphonies Nos. 9, 13, 14 on these pages--check search box above). The new one follows in the mode with fine readings. The Violin Concerto has the very nicely turned violin work of Elf Wallin and takes up 53 minutes. The Symphony fragment is quite short at seven or so minutes, yet it is a valuable addition.

The little of the last, the aforementioned 17th Symphony that comes to us here is an Expressionist cry of sharp gloom yet too a monument to Pettersson's undiminished powers as a tone painter.

The Violin Concerto No. 2 is an important work, surely. It comes some many years after his 1949 Concerto for Violin and String Quartet. The first version of No. 2 was finished in 1977, a year after his Symphony No. 13. The composer referred to it as more of a symphony for violin and orchestra more so than a concerto per se. And yes, it soars along very symphonically with an endless melodic thrust led by the very feelingful violin part. Like all mature Pettersson the music is quite chromatic but then not quite atonal. We hear the revised version here, which was the final 1979 take on the music by the composer. The work has a remarkable flow, perhaps a bit more resolved and perhaps even a bit more hopeful at times than one expects from his later output

In the end this is some of the finest examples of the last music of Pettersson, not standing at the edge of a precipice as much as some of the later symphonies (though the Fragment here is quite edgy), and so then the Concerto is a fine contrast to those works.

So I would recommend this one strongly for those just coming to know the composer or too for the confirmed Pettersson listener. Nice.
Posted by Grego Applegate Edwards at 7:59 AM