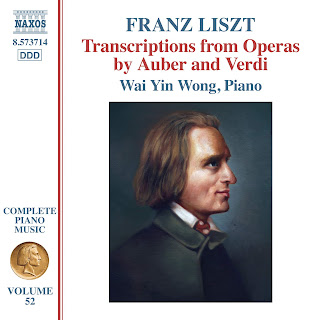 You might think that by the time Naxos' Franz Liszt's Complete Piano Music Volume 52 rolls around that the whole thing would be running out of gas? This volume comprises Transcriptions from Operas by Auber and Verdi (Naxos 8.573714). To be frank I must say that after listening to this one a good number of times I find it not uninteresting.

Liszt's fairly extensive collection of piano transcriptions from popular operatic moments corresponded to a public need--a pastime of how the piano figured in the everyday life of musically involved folks, in some ways a sort of quite fancy juke box potentially for hearing the "hits" of the day. So if you went to an opera and you liked the music the transcriptions were a way of being able to commune with the music at home at one's leisure, at least in principal.

Sometimes the level of pianistic difficulty for the works on this volume was not so daunting as to count out a well versed amateur. On the other hand some are up there with Liszt's more virtuoso endeavors and so called out for the master or a talented student or rival to do the music justice. Liszt might have worked some of the more flashy ones into part of a recital or a soiree, or again he also may have had a particular pupil in mind so that she or he,  a more ambitious pianist, might take on one of them to keep growing in technique and to dazzle audiences for themselves.

Yet there are definite attractions here regardless of such considerations and functions. The opening, two rather involved bravura arrangements of a tarantella from Auber's La Muette de Portici, is good fun and a definite dazzle in the form of a theme and progressively elaborate variations.

What this Volume 52 gives us should we be so interested is a kind of primer to Liszt's approach to "de-orchestration" and variational ornamentation, rolling octave "trills" for example, arpeggios, a cascading tremolo and such. It also gives us a handle on what sort of extensions constitute for Liszt a variation or a "fantaisie" on a theme.

These transcriptions are not of operas we generally pay a whole lot of attention to these days, and that explains perhaps in part why this is Volume 52 and not, say Volume 40. So we get transcriptions from Auber's aforementioned La Muette and then Verdi's I Lombardi and Ernani, and finally three transciptions/arrangements from Auber's Le Fiancee.

Young pianist Wai Yin Wong does an elegant job realizing these pieces and the recording sounds quite good from a technical point of view.. This may not be essential listening, surely, but then it does have its attractions, especially of course for those very into the Liszt piano legacy.

Posted by Grego Applegate Edwards at 8:19 AM