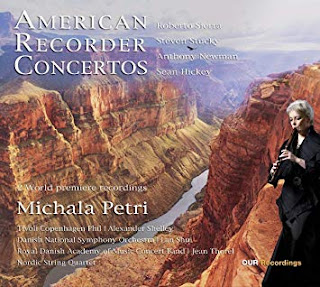 The recorder saw a peak popularity in the Classical music world with the advent of the Baroque period. The Modern era by contrast has not found the instrument entering the repertoire much at all. But if Michala Petri and the composers represented on American Recorder Concertos (OUR Recordings 8.226912) have their way that could be changing.

Our current phase of Modernity does not have the same attitude about tonality and the lack that the Dodecaphonic composers may have had, not to mention the latter's stylistic need to unveil chromatic non-continuity that in some ways is not inherently idiomatic to a recorder. What that means is that the recorder's ordinarily contiguous diatonicism is no longer necessarily a drawback to the contemporary idiom, provided that composer and player situate the possibilities of the instrument in an adventurous and imaginative use of sequencing and create anew a virtuosity fitting to our times. That means something,

Happily one hears such things on the music of this program. As one gets to know these pieces one does not feel that there has been undue compromise either on the composer's freedom or the player's musicality. The four works we hear in fact sound very much of our time yet too sound very idiomatic to the beauty of the instrument in timbre, intervallic grace, and lyrical earthiness.

Recorder virtuoso Michala Petri has everything to do with the existence of these four works for she specially commissioned them, happily, to redress the general scarcity of recorders on the Modern American compositional scene, especially as full-blown concerted statements.

And so between 2000 and 2016 the four works featured on the program came to being. And now with this release we get to hear all of them in near-ideal conditions with well prepared ensembles and Michala Petri's considerable artistry.

What strikes me about it at first consideration is just how contemporary it all sounds, yet too how each composer has gone forward with each a distinctively original step ahead.

For example harpsichord virtuoso Anthony Newman's "Concerto for recorder, harpsichord and strings" for Michala, Newman on harpsichord and the Nordic String Quartet has a more Neo-Baroque element in play but in no case would you confuse this music with that of the earlier period. It is a delightful romp with some rather incredible recorder pyrotechnics and a Baroque brightness coupled with a Modern freshness.

Roberto Sierra's "Prelude, Habanera and Perpetual Motion" gives Michala and the Tivoli Copenhagen Phil under Alexander Shelley a widely expansive Latin feel as it is a refiguring of a work Sierra originally scored for recorder and guitar. We feel the presence of the initial instrumentation yet also a pronounced color palette coming out of the new timbral possibilities.

Steven Stucky's "Etudes," a concerto for recorder and orchestra, started this series of works in 2000 and grounds our sensibilities in a series of interplays between Michala and the Danish National Symphony Orchestra (under Lan Shui) that show a masterful compositional hand and help spell out for us a new sensibility for the recorder in our contemporary world.

Finally we have at nearly 30 minutes the longest and perhaps most ambitious of the four works in Sean Hickey's "A Pacifying Weapon" for recorder, winds, brass, percussion and harp, this time Michala Petri joining forces with the eminently capable Royal Danish Academy of Music Concert Band under Jean Thorel. It is a tour de force with twistingly, fiendishly difficult recorder heroics
against a firebranded windband backdrop contrasted by meditatively ponderous reflective moments.

The promise of the recorder concerto for today has in this way presented itself to us and we find in all ways a virtuoso heroism coupled by a discerning contemporary stance on what constitutes a concerto. Perhaps the most remarkable thing is the unforced outflowing of this music as a natural give-and-take between the instrument, its widened capabilities in the hands of a master performer and the considerable forward leaning imaginations of the four composers and their memorable art on display for us in this program.

I am happy to recommend this album for anyone interested in the instrument and so also in the contemporary concerto as it is evolving in our times. Kudos to all involved.
Posted by Grego Applegate Edwards at 9:21 AM