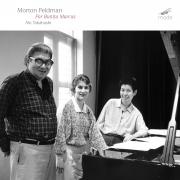 Morton Feldman (1926-1987) was a composer like no other before or since. He quietly made his way through the musical stratosphere in the USA beginning in the '50s and went through several productive phases. The very last one is especially dramatic, featuring sprawling works that repeat and vary in the most contemplative ways, with no formulaic or mechanical unfoldings, rather with inspired intuitions, ever.

The 1985 work for piano, For Bunita Marcus (Mode 314) brings to us 75 minutes of concentrated meditations, as played here by pianist Aki Takahashi. One would expect a masterful performance because of Aki's involvement historically with the Feldman oeuvre. And she in fact was the very pianist who introduced the work to the world in the premier. Importantly after she premiered Triadic Memories Feldman was so moved by the performance that thereafter every piano work he composed was with her in mind. This corresponded with the final Feldman compositional burst where each work was tailored to a particular performer or set of performers, and so the music was conceived as following a kind of logic coming out of the composer's envisioning the performance as the performer would see fit to accomplish it.

The 96/24-bit "hi-resolution" recording made in 2007 sounds every bit as good as you would hope and the performance has the ever-consistent concentration and even-handedness that allows the music to roll off of the recording like an endless carpet, with the patterning there to experience and a kind of smoothness of delivery so that you sense no abrupt changes as you listen. All melds together as one single processual whole as the later Feldman approach demands.

As James Pritchard so aptly states in this album's liner notes, "like all late Feldman works [for Bunita Marcus] is an adventure that takes a relatively long time to play out, but is remarkably lacking in heaviness." We may expect an epic, he goes on, "but what we get is the present moment, in all its beauty, over and over again."  It is all about the facinating chance for the listener to follow the next and then the next next. That in Pritchard's view constitutes the beautiful unrolling of the work. Indeed to me that unpredictability and always "to handedness" or ever-potentially ever makes later Feldman a kind of endless roadshow of Zen "suchness."

It is music to enter into with a promise of self-transformation. If you take to the music you hear all music a little differently afterwards. Or at least that is a real possibility. Aki gives us the optimum performance. Huge kudos to her and Mode records for bringing this to us. Very recommended.

Posted by Grego Applegate Edwards at 9:56 AM