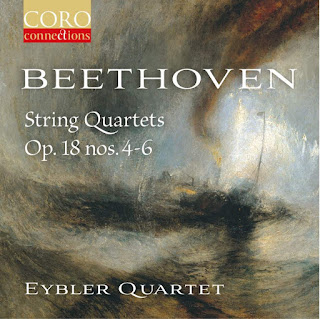 A little bit of controversy can be a good thing, if the subject matter has "been-there-and-done-that" in some people's minds. So when I heard that the Eybler Quartet kicked up a bit of a fuss about early Beethoven Quartets, of all things, I wanted to see (or rather hear) for myself. The Op. 18 nos. 1-3 Quartets were given the Eybler treatment some time ago.What I said about that volume here on April 8 of last year was seconded by others.  Gramophone called it "defiantly un-glossy but consistently stylish." So I subsequently have had a chance to review the second volume, covering Op. 18 nos. 4-6 (CORO connections 16174). I grabbed at the chance and now I report in with pleasure.

I must say I am pleased with these performances. Very pleased. Often enough earlier incarnations of iconic Beethoven forms (the piano sonatas, string quartets, symphonies) get a kind of teleologic treatment, as if (for example) all the symphonies are prefigurations of the 9th, etc. In other words there can be a tendency to give to the earlier Beethoven the thickly "Romantic Titan Giant" kind of reading. Yet surely there are other ways of hearing, of playing those earlier essays, that it is possible to view the works as special creations, that we can try and see earlier Beethoven as equally attractive but in different ways?

So the Eybler Quartet gives us the 4th through 6th Quartets of the Op. 18 as something much less Teutonic, less blown by cosmic weight, by musically heavy dark matter so to speak. and instead we get something lighter, spritely, more Mercurial. Is it possible that Modern performance practice can breath new life into this period of the Master and his legacy?

This Eybler Quartet installment surely does something of that. Tempos can be quite crisp and invigorating. The tone of the quartet is rather the opposite of the old school Budapest Quartet that I we weaned on years ago. Gone is the buzzingly rich and weighty bee hive of string intensity one heard from the icons of an earlier era. Instead there is a lighter tone that then makes room for a heightened agility that is a definite hallmark of the Eybler Quartet performance here.

There is plenty of feeling, surely, in this reading. But it is not as ponderous. It is ever in motion with an emphasis to a "getting" rather than a sort of staunchly present "already thereness" if you will pardon the loose jargon.

That on-the-way quality of the performances is rather not as I have alluded to a mere pointing towards the mature Beethoven. There is a great deal of brio, for example, but not the burr-rich sonics of Late Romantic style. It is a brio built for speed, not as much for deepness of aural footprint. That is not to say that the quartet sounds at all thin. It is a relative thing.

The liners to this second volume of the Op. 18 works nicely foregrounds a controversy surrounding Beethoven's early music. He was presented with one of the first commercially available metronomes and eagerly began to give metronomic recommendations for movements in the printed music itself. Some musicologists later on justified certain tendencies in performances practices by suggesting that perhaps Beethoven's metronome was not working properly, since they asserted that some of the tempos seemed too fast by a fairly significant rate. But suppose Beethoven meant exactly what he indicated? We hear some of that in this program and it is exhilarating.

The liners speak of another performance habit prevalent since the days of Berlioz and Wagner--the tendency to vary the tempos within movements according to considerations of affect and such. On the opposite end of such things was the earlier viewpoint of Hummel and Spohr, who advocated at least of these earlier works that one more-or-less should stay within a particular tempo upon stating a tactus (rhythmic figure that establishes a tempo) unless specifically directed otherwise by the composer. So in that way the music tends to "rock" and so also sometimes at a stirringly more rapid rate than what we are used to in hearing this music.

All of these factors come into play and provide for us a fresh look at some very familiar music. I must say that the Eybler approach in this volume gives to me a liberating joy. This is masterful music in its own right and the group brings this all out in ways that surely provide for us a new and vital reading of the quartets.

A big bravo to this program! I come away from it feeling like I have seen another part of Beethoven that I have not quite experienced in this way before. It most certainly appeals as a landmark in a post-late-Romantic point of view. Listen to this by all means. The Eybler Quartet is on to something!
Posted by Grego Applegate Edwards at 8:49 AM