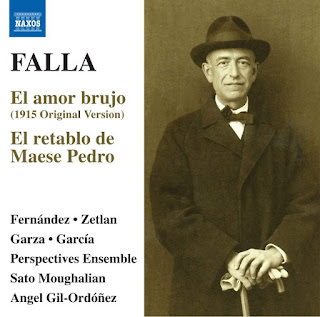 Anyone who finds the "Spanish tinge" to their liking and appreciates how that can combine in a kind of very lyrical Modernism would take readily to a new performance of El Amor Brujo (1915 Original Version) and El retablo de Maese Pedro (Naxos 8.573890) by some excellent vocalists and the Perspectives Ensemble conducted by Angel Gil-Ordonez.

These are two by the wonderful composer Manuel de Falla (1876-1946), two of his very best. You might well know some sections of El amor brujo that are often enough performed, especially the "Ritual Fire Dance," in its orchestral excerpt. But the full version of El amor brujo, that is so much more, and it is especially nice to hear it in this original version from 1915. The slightly later El retablo de Maese Pedro (1923) is not heard nearly as often as it deserves as well. Put the two together with these performances and we have something.

If there ever was a Spanish Stravinsky, without being some obvious borrow, it is in de Falla, in these works as much as anywhere? I do not suppose it is necessary to pick up on that to love the music, and it is more in a Petrushka-meets-L'Histoire than the Rites-meets-Renard? It is all music of the highest Neo-Classical and Modern folkishness at any rate.

What makes this particular coupling, these particular performances compelling is the presence of the 1915 version of Brujo and the painstakingly vibrant folk quality of the reading of both scores. The Perspectives Ensemble sounds just right under conductor Angel Gil-Ordonez and Music Director-Flautist Sato Moughalian. Cantaora Esperanza Fernandez is fabulously earthy and folksy in Brujo, as good as one might possibly imagine. But then soprano Jennifer Zetlan, baritone Alfredo Garcia, and tenor Jorge Garza are excellent as well in Pedro.

Combine all this with the nice Naxos price and that spells G-O-O-D  D-E-A-L! I would not hesitate. It is a great listen.
Posted by Grego Applegate Edwards at 10:55 AM