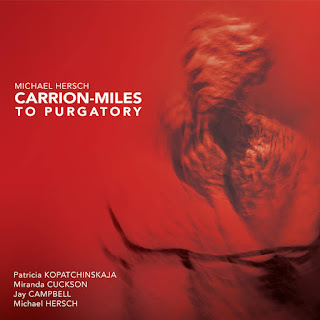 Of the future we of course cannot know but with the vibrant presence of present-day Modernist Michael Hersch there seems bound to be a continuingly advanced presence to come. His latest album Carrion-Miles to Purgatory (New Focus Recordings 229) reminds us how his dedicated energies do not flag.

It is a gathering of some three chamber works-- "...Des Ruckgrat berstend" with Patricia Kopatchinakaja on violin/voice and Jay Campbell on cello, "Music for Violin and Piano" with Miranda Cuckson on violin and Michael Hersch himself on piano, and the 15 movements of the title work "Carrion-Miles to Purgatory" with Cuckson and Campbell.

This is in Michael Hersch's wheelhouse--Expressionist, beyond tonal, post-Serialist, ever inventive and flowing with poignancy.

So "...Das Ruckgrat Berstend" was commissioned by Kopatchinakaja, who wanted something she could simultaneously sing-recite and play on violin. Hersch chose the poetry of Christopher Middleton (1926-2015), a favorite of the composers and previously quoted s reference in earlier scores without setting text to music. The words were translated from English to German at Kopinakaja's request and the vocal part has detailed directions for manner of performance in the score (e.g., a gritty whisper etc.).

From there we move to "Music for Violin and Piano," another shorter piece clocking in like the above at about 11 minutes. It is an excerpt from the live recording of the music the two made in concert in later 2018. It marks a new phase in Cukson's collaboration with the composer, where there is interactive performances. Before that Cuckson has played Hersch's compositions in important instances, e.g. his Violin Concerto, solo works and other things from 2007 to today. The concert in whole consisted of a selection from Hersch's numerous short works under the rubric "Music for Violin and Piano," plus some solo violin music etc.

The fifty minute Carrion-Miles to Purgatory brings the program to its primary focus. The violin-cello duo is of course a somewhat exotic one as far as instrumentation in the repertoire goes. And too Hersch goes about the music in ways that set him apart further. The 15 movements each have loose parallels in poetic texts by Robert Lowell, namely from his Lord Weary's Castle. Here music is not meant as a direct articulation of the poetry meanings, but instead a sort of subliminal reaction to them. The poems kept the composer "company" as he wrote the music, which in the end is a reaction to the loss of a close friend.

I do not have words to put in place of the experience of this music. It is rather ineffable, emotive, and very in line with how Hersch's music has been unfolding. I recommend to you this music as an example of Modernity today. A very rewarding program.

Posted by Grego Applegate Edwards at 8:28 AM