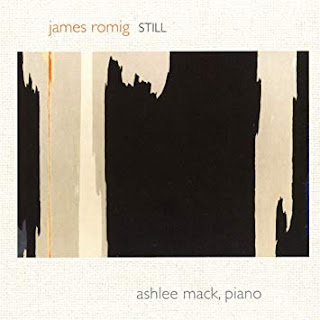 The liners to Still (New World 80802-2) (2016), for piano, with soloist Ashlee Mack, remind us of the mid-century Schoenberg-Stravinsky divide, when Serialism dominated one camp, Modern advanced "Tonalism" the other. A subset pitted Serialism against Cage and follower's Aleatoric music. When Reich came along and firmly established himself Serialism had by some reports won the day, and then at that point Minimalism asserted itself as a quasi-polar opposite. Today we are evolved into a number of camps and that is not necessarily a bad thing. And in the end American composers like Wuorenin reconciled the advanced rhythmic qualities of Stravinsky with the Serialist successions of Schoenberg, as the liner notes to this album so astutely point out.

James Romig (b. 1971) gives us what at first sounds like a kind of later-Morton-Feldman influenced Minimalism on the continuous 54-minute Still. There are a series of notes that get utilized, in a dreamy ritual haze of endlessly unfolding pedaled notes that sustain and thereby run together yet are never sounded simultaneously. The unfolding of notes do not appear rigorously derived as in the Serial, yet Romig's sort of linear, horizontal spinning out is not alien to Serialism nor to the left-to-right idea of the tone row coming to being and then getting reworked in variable ways. Still does in no way that I can hear do that in any covert way. Yet further to the ears the way the register and order of notes varies is potentially aleatoric or random seeming, though to the naked ear it is not clear if that is intentional or not and it does not matter. That in itself seems interesting to me but it would take us off track if I speculated any further on this sort of phenomenological aspect of listening to the Modern.

It is all a play on listener memory as it is necessary for she or he to put together the all-in-all of this music out of what seems like at first a "simple" series of unfolding plunks, and so too from what one senses at first there is more of a "ritual semi-diatonic" realm than a chromatic one, but never invariably  so. We do that piecing together  as we listen and feel more actively involved in the making sense of it than with some music, which in the latter case is more-or-less to spoon-feed you "meaning." There seems eventually more and more an intrusion of a stepped chromaticism into the quasi-diatonic towards the end, and that gives you pause, nicely so.

The execution of the notes never sounds as if it is instantiating a formula, but comes at you as a rubato with bunches of notes sounding regularly but not rigorously or in other words not rhythmically. The order and number and choice of notes varies over time but remains ever in legato-sustain soundings one after another in non-pulsating successions.

The specific intentions of Romig in this work would become more clear to you if you read the liner notes that accompany the CD. I merely follow the hint in this review but react as a naive listener. What matters is that the music evokes if you let it. It gives you a way to enter decidedly into a very dreamy sort of contemplation.

Ashlee Mack gives us a very convincing performance of a music that bears up very well under repeated listens. Viva James Romig for this one. Very recommended.
Posted by Grego Applegate Edwards at 7:32 AM