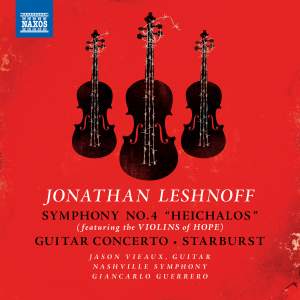 As someone sampling a prince's ransom of New Music every month, I must admit there are times when the constant newness can be challenging, in the sense that it can be taxing to keep the ears completely open all the time. But no matter because new voices need to be heard. Today it is Jonathan Leshnoff (b. 1973), a composer who, in the view of  the New York Times is a "leader of contemporary American lyricism."

A full CD of his orchestral compositions (Naxos 8.559809) comes our way thanks to the resources and considerable interpretive talents of conductor Giancarlo Guerrero and the Nashville Symphony. They tackle two somewhat lengthy and ambitious works and an addendum, namely his "Heichalos" Symphony No. 4 (2017), his Guitar Concerto (2013) and the eight-minute Starburst (2010).

This is tonal music that does not shy away from richly harmonic flights, not especially dissonant most times, but then not entirely expected in their sequential unfolding, either. There is something rather Neo-Romantic going on at times, a kind of passion that has a bit more chutspah than Samuel Barber. It does at times soar to the heights of sorrow that you can hear so movingly in Berg's Violin Concerto.

Listen to the Second Movement ("Slow") of the Fourth for an excellent showing of this passion and the lyricism alluded to above. It features "The Violins of Hope," instruments once played by Jewish musicians during the Holocaust.

The 4th Symphony appeals moreover  in its minor-moded overall thrust. And in the end we reflect on hope in the face of the most horrifying developments in modern times. As the composer tells us in the liners the symphony is the "representation of the spiritual/ethical embodiment of this Jewish survival." So in the end it is a tribute to music in the face of evil and a stubborn hope (& belief) that good will prevail.

The Guitar Concerto has a minor tonality as well, but is considerably less tragic in its countenance. Guitarist Jason Vieaux handles nicely the solo part and the ravishing adagio of the second movement stands out magically as another excellent lyrical meditation for us to sink into. The outer movements are bracing and a properly contrasting set of creative inventions one most certainly can appreciate as one listens repeatedly. The final movement bristles with thematic energy, with an almost folksy series of motives that sound rather Semitic in a happily memorable way.

The sendoff, Starburst (2010) is a whirl of motion and activity, an orchestrational brightness and a great way to conclude.

I must say there is much to like about this music, but it is not perhaps as much a look ahead as a glance, effectively, at the past, a summing up and reaction to where we have been in music that nonetheless finds original ways to revisit forms by now long established. This however is by no means institutional music but rather a living breathing thing. Each work stands alone as an offering for our appreciation and pleasure. Nicely done!