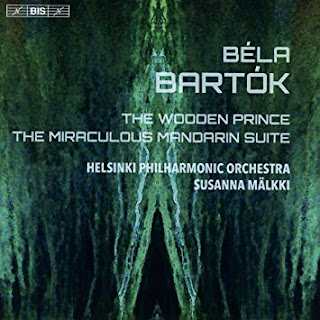 The complete picture of Bela Bartok's development and flourishing, 1881-1945, is a complex one and in my view it takes a long time to assimilate fully his overall impact on the Modern music world. The legacy of Modernism ever shifts, ebbs, flows, changes and Bartok's recognition seems to grow stronger the more time passes. In my own case there are some works I am still coming to appreciate much better in time. That would concern (among others) his The Wooden Prince and The Miraculous Mandarin Suite, the two of which are coupled on a new CD by the Helsinki Philharmonic Orchestra conducted by Susanna Malkki (BIS 2328).

These, as the nicely succinct liners put it in the accompanying booklet, do not fit into the same classification as the folk-music drenched works like the "Mikrocosmos," or the more advanced Modern icons like the later String Quartets or the "Concerto for Orchestra." Rather these two orchestral suite scenarios are meant to follow a story line as in a ballet. They are in fact "pantomimes"--"The Wooden Prince" with very much a balletic focus, "The Miraculous Mandarin" (1917-24) in contrast with only several actual dances. The former (1917), like the opera Bluebeard's Castle (1911-18), is based on a collaboration with fellow Hungarian, poet Bela Balaczs.

As the liners to the current CD suggest this music is not expressly Modern with a capital /M/ so much as it is along the lines of Stravinsky's Petrushka, brilliantly colorful orchestral music that shows true insight and vision but does not yet engage in a voyage to the farther regions of full Modernity.

Both works in this Helsinki/Malkki reading sound phenomenal. The audio is top-rate and the performances selflessly devoted to realizing Bartok's objectives, so it seems to me. This is not the place to try and capture the music descriptively. It is magical in the hands of Malkki but refuses to be pinned down. Yet with extensive listens it is music that impresses as rather tabula rasa--not really at all Late Romantic, yet not decisively Bartokian in the fully mature sense. In part that elusivity comes out of an impossibility to group these in the typical scenario of the 20th century. Yet the music is in no way anachronistic. That in itself is fascinating.

So these are versions to hear, absolutely, and enjoy. I am glad for the painstaking attention to detail and the very dynamic and thoroughgoing panache. Bravo.
Posted by Grego Applegate Edwards at 8:27 AM