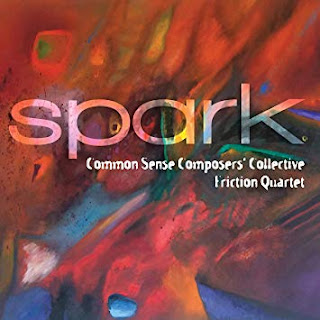 The institution of the String Quartet has been at least since Beethoven one of the primary loci for the most deeply ambitious and ambitiously deep music of so-called Western Civilization. The idea of deeply serious music is at the heart, rather naturally, of the Art Music project in general over the last hundreds of years and the artful chamber work that is for profundity more than standing ovations is at the heart of it. It is a part of that heart. So a program of New Music String Quartets promises to be something to concentrate upon, surely. We are not disappointed in this wise with a recent such volume entitled Spark (Innova 024) containing works by members of the Common Sense Composer's Collective as ably performed by the Friction Quartet.

The "Common Sense" in the collective name Common Sense Composers' Collective, according to erudite liner-note writer Richard Taruskin, is meant in the sense of Thomas Paine's rebellious group that asserted root values in a spirit of a regenerative movement forward. And Richard mentions most importantly Kant's related idea of a "shared faculty of judgement that allow[s] for intersubjective consensus." So the collective implicity or explicitly agrees on a way New Music should be.

Listening to the eight quartet works that comprise the program on this CD, one senses a kind of non-Systems oriented approach to the New Music work that one feels and hears on the pieces we hear. So these are in some sense more akin to the lineage of Bartok than Schoenberg, to simplify things for now. It is Modernity at the service of an aesthetic statement rather than, to simplify again, the opposite!

These works were originally intended for a series of premiers (during 2010) featuring two other quartets. SPARK has taken them over as "adoptive parents" as it were. They have made them definitive in the image they see fit to bring to them as they have learned them and imbibed in their spirit.

That is not to say that these works are somehow monolithic in style and intent. That they are not. There are repetitions at times without those phrases being doctrinaire Minimalistic. There are some "Jazz-Rock" elements at times as well.  There are edgy corners of some of the works that touch upon High Modernism, and there are elements that might very loosely be dubbed in some combination of High Modernism and Neo-Classical in some very vague way, not obviously.

None of the works are ephemeral or superfluous to my ears. Every one is a statement that bears repeated hearings. That applies to Marc Mellits and his  "V: Five" from his 3rd Quartet, Dan Becker and "Lockdown," John Halle and "Sphere(s)," Belinda Reynolds and "Open," Melissa Hui and  "Map of Reality," Ed Harsh and "Trill," Carolyn Yarnell and "Monographs" and finally Randall Woolf and "No Luck, No Happiness."

The performances are top notch, the compositions are weighty and well worth pondering, enjoying, experiencing. Very recommended.
Posted by Grego Applegate Edwards at 2:21 PM