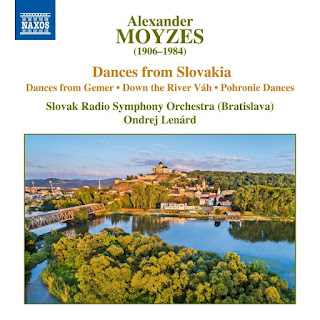 Following on the heels of Naxos' release of the ten symphonies of Alexander Moyzes (1906-1984) is this album of Dances from Slovakia (Naxos 8.5554777) and other works addressing in part the composer's (successful) search for a national folk identity. The Slovak Radio Symphony Orchestra (Bratislava) under Ondrej Lenard do a convincing job realizing the scores with local flair and charm--and the audio is first rate.

This is neither rabidly Modern fare nor is it overly Romantic, but instead exemplifies Symphonic Nationalism as one might imagine it in a Slovakian vein. Moyzes we found in the previous symphony series was thoroughly grounded in orchestral writing and the three compositions presented in this follow-up give us another angle on his ways.

"Down the River Vah, Op. 26" (1935/45) is the more depictive and descriptive of the three as the title suggests. It is evocative and exuberant music perhaps better heard than described.

"Dances from Gemer, Op. 51" (1955) and "Pohronic Dances, Op. 43" (1950) burst over with folkloric melody and dance rhythms but too get a full symphonic-orchestral treatment that shows us Moyzes' keen musicality once again.

Both dance suites come in part out of Moyzes' involvement with the Slavic Folk Artistic Ensemble (SL'UK) and their music. The material he wrote for the ensemble finds its way to orchestral-symphonic realms in "Dances from Gemer," which extends, is inspired by and composes anew themes related to traditional folk music from the Gemer Region of Southern Slovakia. A cimbalom is a welcome part of the orchestra for this suite. Timpani and percussion are used effectively in bringing out the lively rhythms. I am glad for that (since I was trained as a classical percussionist among other things). Excitement has a part to play. I like this one quite well!

Similarly "Pohronie Dances" comes out of music originally composed for SL'UK, based on Central Slovakian styles along the Hron River, adapting the "highwayman's dance," "maiden's dance" "woodsmen's dance" and the dance of "merry village people."

We are treated to some fine music here, well played. Anyone with an interest in musical Nationalism in the region will be pleased to have and hear this, but then it should appeal to anyone who would like some lively fare. Recommended.

Posted by Grego Applegate Edwards at 4:18 AM