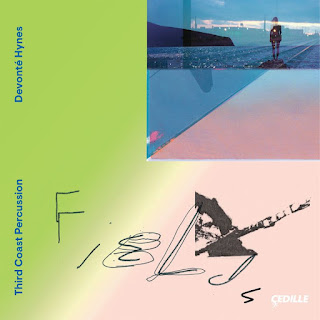 Third Coast Percussion grabs onto the Ambient Minimalism of the music of composer Devonte Hynes on the recent album Fields (Cedille CDR 90000 192), which creates universes of sound primarily out of mallet interlockings and ambient electronics. If New Music could remind you of some album track in Prog Rock, this could qualify for its cosmicality and spacey directedness.

Devonte Hynes gives to us on this program the 11 movement "For all Its Fury," plus "Perfectly Voiceless" and "There was Nothing."

Devonte is best known for acclaimed singing-songwriting and pop production forays (primarily as Blood Orange) but he started out in Classical Music realms. The music at hand gives us work highly engaged with classicism as we understand it today.

The music we hear on the program came about when Third Coast was seeking to create an evening of New Music for the Hubbard Street Dance Chicago troupe. Devonte ultimately came on board and through a series of interactions--Hynes putting together composed audio on a Digital Workstation accompanied by scores, Third Coast transforming that music into their orbit via arranging and reorchestrating it all for the quartet's instruments, their proclivities and the dance troupe's considerations, and on from there. Some of Dev's synth-pad electronics work and audio transformational feel was I believe retained or adapted so that the result is fully collaborative in the best ways--and for that constitutes a sort of convergence of stylistic aspects we do not ordinarily see together in a single musical context.

The title Fields alludes to Dev's view of the music as a series of open fields where the Hubbard Street dancers, Third Coast Percussion and Dev could freely interact. The music surely reflects such open horizons in the most appealing ways. This is New Music for people who may not much like New Music, or for those unfamiliar with such things. It is primarily good music beyond category.

I fully recommend this one for all progressive folks, for those who do not mind or even welcome a bit of  groove and New Music fans who are open to the new in whatever form our artists see fit, regardless of preconceptions. Minimalists will also take heart I suspect. For this is very good indeed.