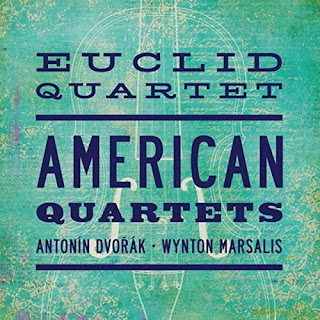 The Euclid Quartet come through with a nicely played concept album, American Quartets (Afinat AR1701) which features Dvorak's Quartet No. 12 "American" and Wynton Marsalis' Quartet No. 1 "At the Octoroon Balls." It is a smart pairing and one to set off both works in  a new context.

The Dvorak Quartet is of course increasingly acclaimed along with the "New World Symphony" as a brilliant Bohemian's take on US vernacular music (including Afro-American of course) as part of his US visit in the later 1800s (1893). The Euclid Quartet play it with great panache and chutspah in one of the most dramatically superior readings I've heard. Yes!

Wynton Marsalis' 1995 quartet "At the Octoroon Balls" centers around the 19th century New Orleans institution that brought lighter-hued Afro-American women together with prospective, generally well-off white suitors for what were common-law marriages. All that helped create and maintain a Creole strain in NOLA life which was to have great impact on the culture and social makeup of the city.

It is a work that in a way follows Duke Ellington in his manner of amalgamating a Jazz-Classical nexus on the works meant to be a little more on the Classical side than was usual for him. That is, there is a way of inserting pronounced Jazz-Folk roots so to say with Classical syntax and ensembles and less or none of course of the improvisational mode.

Yet for all that Wynton's sophisticated originality holds forth with seven rootsy movements that play in part on the heightened Black-White cultural tensions and pronounced societal ambiguities of these Creole institutions. So musical  intertwinings of the two worlds occur in interestingly complex ways.

The Euclid Quartet gives it a great flourish and a most sensitive reading here. Bravo! This is a rather major piece of music that may be overlooked in the overall Marsalis canonization efforts that once were central to Jazz discourse but perhaps now are more healthily intertwined in the overall discussion of the later period of Jazz? No matter, the point is the music is quite rewarding and that's the main reason to want to listen and appreciate a work, though other dimensions can be important too of course.

So all told this is a most attractive offering that should stimulate you regardless of your particular musical background. Well done!
Posted by Grego Applegate Edwards at 3:59 AM