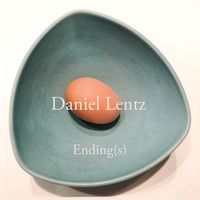 If you have been listening to New Music with a capital /N/ for a number of decades chances are you know and appreciate Daniel Lentz. His minimalist works have made an impression and today he keeps on, only the newer music has a "beyond" quality. And so today we consider a new release example, a two-orchestral work program dubbed after one of the works,  Ending(s) (New World 80815-2).

This is not music in some Minimalist pocket any longer, and in truth Lentz has always been a distinct voice whether in or out of any particular genre, in my experience. By now the music is firmly tonal, less repetitive than perhaps Radically Tonal or rhapsodically Ambient Tonal in a kind of lyric nutshell. Both works hang together so that listening to them in sequence is akin to a single integrated experience.

Midway into the "Ending(s)" work tenor Siadat enters and we commence a nice sort of concluding climactic overdrive, a pastoral-lyrical intensity that affirms a Modern Romantic sensibility. Yet there are complexities that the music itself heard without knowing the background only hints at. To quote the liners, "Who else but Lentz would think to combine two Japanese haiku with a section of the Requiem Mass and a description of how an atom bomb explodes?" Indeed.

The liner notes to the album also detail a stylistic plethora and complexity of biographical experience that interested parties should definitely read. Suffice to say he is not easily pegged.

This later phase of his music makes an effective escape from the rigorous strictures of orthodox Minimalism yet keeps the supercharged nature of expression that marked (and marks)  that form of music at its best.

It is music that stands up well with a lot of listens and it is not unpleasing in the process. New Music with another wrinkle? Here you go. Recommended.