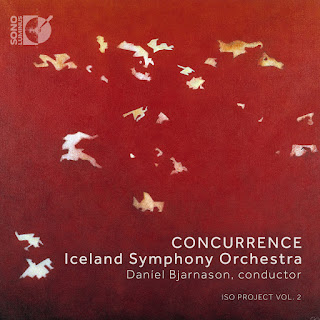 The four works on the program have a kind of consistent style set in common, what one might call High Modern Ambient. It consists of "Metacosmos" by Anna Thorvaldsdottir, "Piano Concerto No. 2" by Haukur Tomasson, "Oceans" by Maria Huld Markan Sigfusdottir, and "Quake" by Pall Ragnar Palsson.

Orchestral sound color is the order of the day with sprawling sound landscapes that in the listening experience meld together as a continuous exploration. Yet each holds together as a unique entity on closer listening. Steve Smith in the liners points to the subgrouping of "Oceans" and "Metacosmos" as more than Soundscapes depicting in oblique ways the natural world of Iceland, but too a human concern with the binding of fellow humans of society, most specifically in "Metacosmos," and perhaps the human heartbeat?

The "Piano Concerto" and "Quake" group roughly together as both concerted works, the piano as "first among equals" in the former, the cello as a bit more independent in the latter.

The excellent performances and sound engineering on this program heighten the feeling of being in a new zone of Modernism today, a kind of tonality that generally has a great deal of sustain and torque and somewhat less obvious periodicity than the Minimalism we have heard in the last few decades, generally speaking. The "Piano Concerto" is the major exception to that in the way it chirrups and pulsates in its own way.

It seems like breakthrough music to me. But you listen and decide for yourself. It is a valuable addition to New Music today, I warrant that. Very recommended.
Posted by Grego Applegate Edwards at 4:23 AM