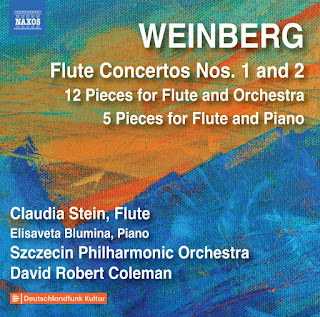 As we become more and more familiar with the considerable collated opus of Weinberg's music his stature grows. Is he up there with Prokofiev and Shostakovich? Well, he is his own muse and impressive, very impressive. The new release of his Flute Concertos Nos. 1 and 2 (Naxos 8.573931) (1963, 1987) is a case in point. The title works, the "12 Pieces for Flute and Orchestra" (1947, arr. 1983), and the "5 Pieces for Flute and Piano" (1947) all seem and feel substantial.

Flautist Claudia Stein gives us ravishing tone and eloquent delivery for all of this. Conductor David Robert Coleman sends the Szczecin Philharmonic Orchestra through the maze of execution with a sure-handedness to which they respond in kind, and pianist Elisavata Blumina does her part with thoughtful grace.

The music is in earnest both as flute showcase and as MUSIC and in the process there is triumph to be heard. Far from there being a dropping off, this album contains further gems polished and sparkling. In the process we get the "Complete Works for Flute" as I gather from the liners. Good-o.

All the music was initially conceived by Weinberg for  flute virtuoso Alexander Korneyev and the combination of singing flute part and symphonic splendor (as applicable) puts the entire opus collection as of a piece in many ways.

In the end the music and the performances are superior fare and should be of interest to Weinberg fans, modernists, and those attracted to flute showcases of the 20th century. Strongly recommended!


Posted by Grego Applegate Edwards at 4:33 AM